A critical security vulnerability was identified in Windows Defender, an anti-malware component of Microsoft Windows that comes pre-installed with every copy of Windows. This number is over 1 billion devices.

Windows Defender has a redemption process used by its driver called “BTR.sys”. This driver takes care of any malicious system and registry files created from kernel mode. For this purpose, the driver maintains a log of all the operations done by a specific file by creating a handle on it. The issue is within the method of the handle creation. 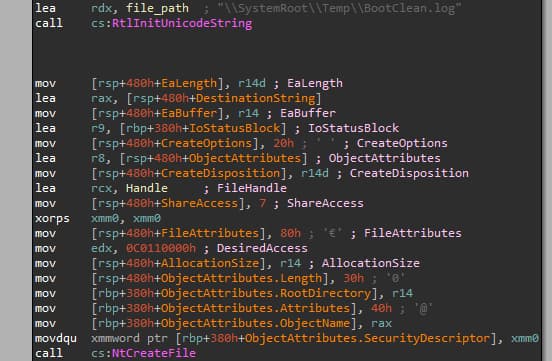 According to a blog post published by researchers at Sentinel Labs, in order to clean the “ri4d” register, it was XORed with itself. By this method, the constant “FILE_SUPERSEDE” is always present in the parameter “CreateDisposition”. The transaction that creates the file after deleting the original one is “FILE_SUPERSEDE”. It can be seen in the image that it does not confirm whether it is a file or a link.

In this way, an attacker can create a link at “C:\Windows\Temp\BootClean.log” which can enable them to potentially overwrite arbitrary files. The link will simply point to the file that is needed to be overwritten.

The absence of a driver from the hard drive until now might be the root cause of this bug being ignored. Instead, that driver was only activated when it was needed with a random name and then dropped. The most updated machines are safe from this vulnerability and also from EoP exploits that are possible from native hard links.

Even though this vulnerability has been fixed in the latest update, it can still be exploited on the new machines if they are not updated to the latest version. It is advised to update your devices without further delay.

I am a CS major specializing in AI and cybersecurity. My interests are gaming, technology, science fiction, and fitness. If I am not consuming media, I will be found at a restaurant or at the gym. There's no in-between.