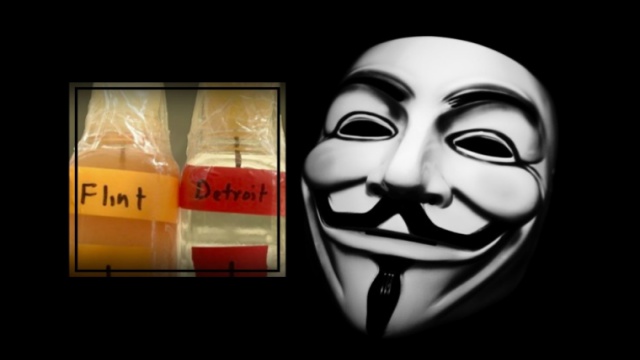 On Wednesday, a statement was released by the Anonymous Intelligence Group, which is associated with the hacktivists collective. It read: “Anonymous Activates #OpFlint…And Yes It’s About Time!”

The statement was followed by a video posted by the group on YouTube. Thus, it is evident that the notorious hacker group has launched a campaign called #OpFlint against the governor.

#OpFlint campaign is aimed at gathering evidence against Snyder so that he could be sent to jail.

The governor has been in the news for quite some time now due to his slow response to the Flint water crisis in which lead levels in drinking water increased so much that officials had to switch the water source to a local river.

The video addresses the widespread reports that lead levels in the blood stream of kids in Flint has increased tremendously, which is obviously a very risky situation.

In the video, as per the tradition of Anonymous, a hooded figure wearing the Guy Fawkes mask appears to deliver the team’s message to public. The message is as follows:

“We currently believe that enough evidence exists to arrest Gov. Snyder for either voluntary or involuntary manslaughter and that a full-scale investigation into the Flint water crisis and a criminal trial will yield the information that will send Gov. Snyder to prison.”

In the video, Anonymous has set its crosshairs on Snyder but at the same time, the group has admitted that they have been late in addressing the issue.

The masked figure also acknowledged that Michiganians have been in great danger since April 2014:

“For over a year now the citizens of Flint, Michigan have been subjected to drinking tap water filled with lead and other poisons.”

The attack plan hasn’t been specified by Anonymous in the video but the narrator has assured that those affected by this crisis in Flint will get justice.

“We will amplify your voice where the mainstream media will surely fail you as it has in the past. We will also join you in calling bullshit on any spin that the corporate media is prepared to put on this.”

The message can be seen as a somewhat belated reaction of the federal class-action lawsuit filed against Gov. Snyder and other officials about two months ago by four families. One month back, a public health state of emergency was declared by Flint Mayor Karen Weaver and four days later President Obama also declared a state of emergency at federal level thereby granting $5million in aid.

The emergence of such drastic reaction just shows how arduously Anonymous is following the norm of launching reactionary campaigns.

Vocativ’s analysis of all the operations launched by Anonymous since its formation in 2006 revealed most of its early campaigns were directed to drawing public attention towards issues like the dark side of the Church of Scientology, child pornography and internet censorship.

However, recently Anonymous has shifted its focus to address most recent crisis situations like the attack on Charlie Hebdo, Donald Trump’s remarks and Paris attacks. This means, instead of inspiring headlines like before, Anonymous is now taking inspiration from the headlines itself. This can be assumed so because the latest Flint water crisis was covered extensively by the media nationwide.