The online hacktivist Anonymous conducted a massive DDoS attack on the official website of Canadian Security Intelligence Service (CSIS) and forced it to go offline.

The attack was conducted against the approval of anti-terror Bill C-51 that provides Canadian Security Intelligence Service (CSIS) immense powers as it can violate digital privacy of any one at any time in the name of countering terrorism.

In an exclusive conversation with the Anonymous hacker behind the attack, HackRead was told that the group will keep on targeting Canadian government and there will be another cyber attack within few days.

A screenshot taken few minutes ago shows the site is still down: 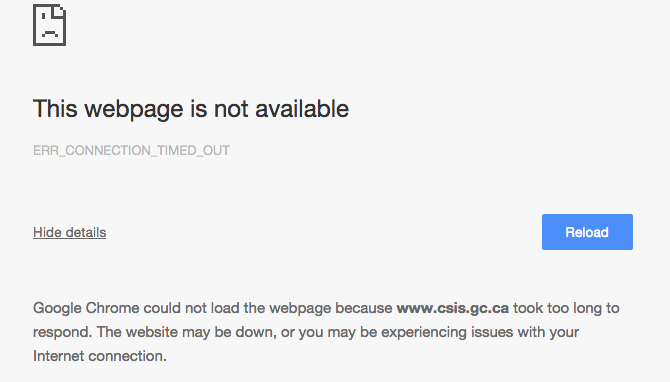 After targeting the website, hacker tweeted if he should stop targeting CSIS and choose another government website??

The local Canadian media reported that the CSIS website is repeatedly under attack and hackers are tweeting about the hack, bashing the agency for poor site security.

Canada approved controversial anti-terror law C-51 that actually provides Canadian Security Intelligence Service (CSIS) immense powers as it can violate digital privacy of any one at any time in the name of countering terrorism.

In retaliation, Anonymous shutdown the government owned websites including the online official portal canada.ca, Department of Finance and Treasury Board, the department responsible for the day-to-day administrative duties of the federal public service.

The Anon community is angry over the approval of C-51 anti-terror law and vows to keep on targeting Canadian government until the bill is taken back.

At the time of publishing this article, the CSIS website was still offline.

Norway�s�top financial institutions came under massive cyber attacks on Tuesday.Anonymous Norway appears to be behind this attack. The…
byWaqas