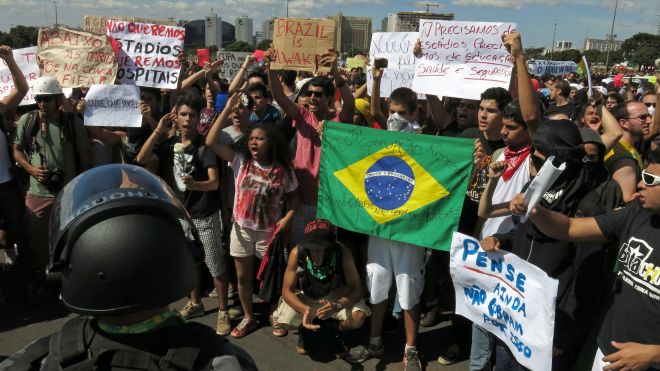 According to the officials, the security forces of Brazil are constantly using secret agents and thoroughly supervising the social media in order to make certain that the aggressive protesters against government do not wreck the world cup of soccer this year. Though the demonstration in the current months is way smaller than the previous year in June, the time when the dress rehearsal was hosted by Brazil for World Cup. Yet the results are frightening such as damaging of banks and stopping particular parts of some main cities, where some of the protesters cover their faces wearing masks quoting themselves as the ‘Black Block’, resulted due to conflict with police.

The government of Rousseff fears the ongoing protests, where recently, some slogans related to stopping of World cup was clearly intended which is expected to start on 12 June and to be concluded by the final on 13 July in Sao Paulo and Rio de Janeiro respectively.

Images of devastated storefronts, injured police, and frightened tourists are what are actually widespread these days. This can surely affect an event for which foreign visitors estimated around 60000 are looking forward. Planned protests are to take place in around all the 12 cities hosting matches. Rousseff, will again be running the four year term after the presidential election which is in October, since the country’s economy is very weak, have lift up the stakes way further.

As per the two officials, in addition to the monitoring process of the group’s talks or communication on the social media, the intelligent agents had penetrated such movements and even passed the information to the police prior and during the current demonstration.

The expert authorities have successfully used the advanced technology in order to locate computers of the violent protesters plus gain the access to their private communications, so that to identify their leaders or supervise their upcoming activities.

A protest which took place in Sao Paulo was certainly a clear example of the type of violent that may possibly spoil World Cup. According to the protestors and some experts who have reach the root cause of such violation has concluded that such incidents are actually provoked by the response of government, which according to them, basically misses what the entire movement is all about. Black Blocks are actually a phenomenon which is international, initially appeared in the 1980s in Europe, during the protests that were against the nuclear power plus some other issues.

In some particular cases, the groups are run under leadership, or any organization, joined by their approach, and their dressing style, usually all in black. That demographic can afford all the luxuries, but many amongst them suffer from the bad health-care facilities, not up to the mark public schools plus long commutes since the government failed to rise their income, and of course their expectations, with some better services. Black Blocks have a perception regarding the political system of Brazil to be broken and actually does not represent them, according to Alcadipani.

A member of Black Bloc named Ana stated that a vast number of members believe that destruction is the sole way to attract some media attention towards their political sights. She further stated that although the group is extremely diverse, but just a single view point unites them, which is that they can never bare silently the way politicians are treating them.

Now the government is horrified by the violence and size of protesters that can explode again just as the World Cup starts. Now what will actually happen will depend on the factors that range from economy to the Brazil team’s performance, which certainly holds the most trophy wins of world cup. However, if the police officials go way far in their oppression, chances are for the reverse effect. Yet some new members are assigned to take charge, but unless the government will not address for the actual issues people will not stop demonstrating.

The protest against the Brazilian government and world cup is not new to the book. In June 2013, hackers had defaced FIFA Brazil World Cup Website with Protest Footage on the homepage.

Security tips - How to protect your online trading account

Choosing a web hosting service that's right for your business