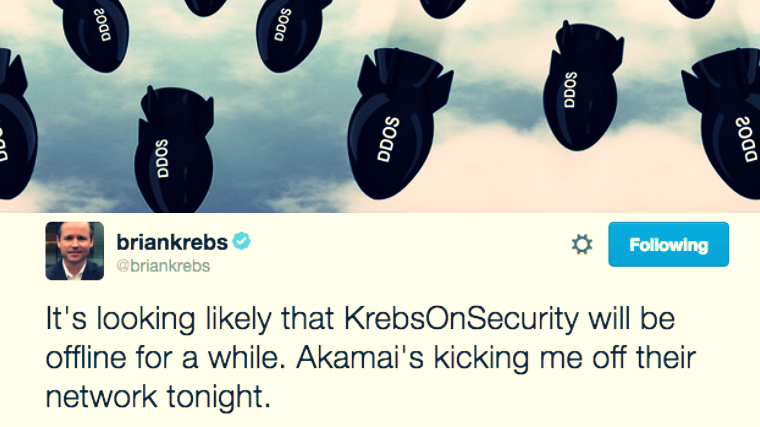 A couple of days ago Brian Krebs’ blog suffered the largest DDoS attack in the history of Internet – Now, his website has been offline probably because the Akamai/Prolexic can’t bear the cost of such attacks anymore.

The official website of cybercrime journalist Brian Krebs suffered and survived 665 Gbps of distributed denial-of-service (DDoS) attack, the largest DDoS attack the Internet had ever seen.

It's looking likely that KrebsOnSecurity will be offline for a while. Akamai's kicking me off their network tonight.

At the same time, Krebs is giving full credits to Akamai for protecting his site and keeping it online during and after the attack.

i can't really fault Akamai for their decision. I likely cost them a ton of money today.

Holy moly. Prolexic reports my site was just hit with the largest DDOS the internet has ever seen. 665 Gbps. Site's still up. #FAIL

It is believed that the attackers were able to conduct such a massive DDoS attack by hacking into Internet of Things (IoT) devices that include Smart cars, security cameras, routers with default or weak login credentials. Remember, PoodleCorp and LizardSquad DDoSing groups were also in the news for hacking IoT devices and turning them into DDoS botnet.

Krebs’s blog suffered DDoS attack after he exposed vDOS, a DDoS attack service ran by two Israeli hackers who were later arrested by the authorities.

So long everyone. It's been real.

At the time of publishing this article, Kreb’s blog was offline, however several big industry leaders have reported attacks of similar or bigger strength in the last few days. The founder of OVH reports that simultaneous attacks on his company came close to 1Tbps.

Ten days ago Bruce Schneier wrote ‘Someone is learning how to take down the Internet’ HackRead suggest you read it, so you can form your own opinion.