A 38-year-old Russian citizen Alexander Vinnik who also happened to be the co-owner of BTC-e, one of the most popular and largest Bitcoin exchanges in Russia was arrested by Greek police in Thessaloniki city.

The arrest was conducted on a warrant issued by the US law enforcement authorities suspecting him of money laundering of over $4 million via Bitcoin transactions for cyber criminals involved in illegal activities including drug trafficking, hacking and ransomware.

The authorities are also suspecting Vinik’s involvement in a hack in which Mt. Gox, a Japanese Bitcoin exchange was hacked back in 2014 and forced to quit their operation. Vinnik then obtained funds from the hacked exchange and laundered them through BTC-e and Tradehill, another digital currency exchange that Vinnik owned.

In a press release from the U.S. Attorneys office, Special Agent in Charge of the USSS Criminal Investigative Division Michael D’Ambrosio said that “BTC-e was noted for its role in numerous ransomware and other cybercriminal activity; its takedown is a significant accomplishment and should serve as a reminder of our global reach in combating transnational cyber crime. We are grateful for the efforts of our law enforcement partners in achieving this significant result.”

As a result of Vinnik’s arrest, the BTC-e exchange went offline on July 26 displaying a “Maintenance” note on the site’s home page: “Site is under maintenance. We apologize for the inconvenience,” the message says. 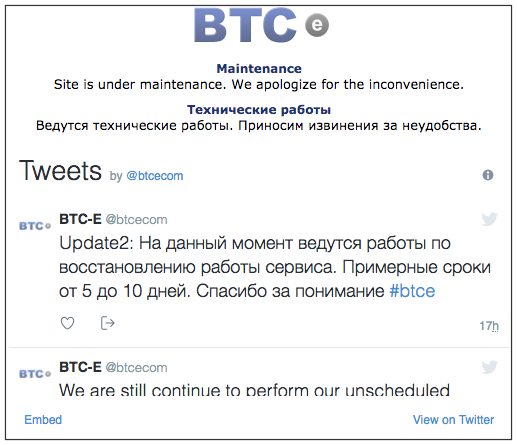 BTC-E is one of the most popular and well known digital currency platforms. A user can anonymously trade Bitcoins on the platform, and as there’s no check and balance, it has often been used by a number of cyber criminals.

As of now, Vinnik will face charges in the United States for his alleged crimes. However, the exchange is one of the oldest virtual currency platforms. It allows users to trade Bitcoin pseudonymously against a variety of fiat and virtual currencies and is known in crypto-currency markets as having relaxed standards for checking users’ identity, and for not collaborating with law enforcement.

This is not the first time when BTC-e is in the news for all the wrong reasons. Last year, it was reported that BTC-e along with BitcoinTalk.org forum suffered a massive data breach in October 2014 and May 2015 respectively in which tens of thousands of user accounts and records were stolen.

The data of both forums is currently on sale on several dark web marketplaces.

Then just two months ago, BTC-E suffered a series of DDoS attacks (Distributed Denial of Service) on their servers which disrupted its service and forced the platform to go offline.

By now, it is evident that hackers and law enforcement authorities have waged war on digital currency and dark web marketplaces starting from the shut down of two of the most popular marketplaces AlphaBay and Hansa whereas hackers successfully targeted and stole roughly $47 million from platforms like CoinDash, Parity Technologies, and Veritaseum collectively in just 1 week.