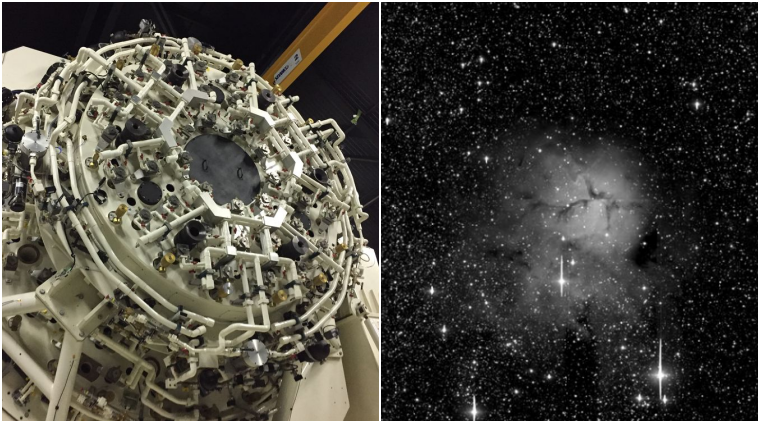 DARPA’s Space Surveillance Telescope will help to track any objects or asteroids reaching close to the Earth.

Pentagon’s DARPA (The Defense Advanced Research Projects Agency) has handed over its Space Surveillance Telescope to the United States’ Air Force Space Command (AFSPC) in New Mexico. The AFSPC received ownership and operation rights for the Space Surveillance Telescope from DARPA at an event held at the White Sands Missile Range. Deputy Director at DARPA Steven Walker and senior leadership from the AFSPC and the Royal Australian Air Force attended the event.

The AFSPC plans to use the telescope collaboratively with Australia. It has a beneficial vantage point since it provides important space situational awareness information from the southern hemisphere. The southern hemisphere is a geosynchronous belt that has been sparingly observed until now. Moreover, the telescope will also provide surveillance data on various transient events like supernovas and asteroids to NASA and the scientific community.

This telescope is quite a headline maker because it has the ability to expand the view from the length of a drinking straw to that of a windshield as it can show 10,000 objects simultaneously even if they are as small as a softball. It can also search an area that is larger than the continental United States within merely seconds. Furthermore, it can survey the whole geosynchronous belt not one or two but multiple times in one night. It must be noted that the whole geosynchronous belt is approximately one-quarter of the sky.

The Space Surveillance Telescope is advanced in more than one respect and has given birth to a number of new technologies: its primary mirror has the world’s largest steep curve which allows the telescope to gather more light to view images across a wider field; it uses Mersenne-Schmidt design to keep the mirror intact and provide compact construction; as well as being the world’s quickest and most nimble large telescope. In a nutshell, this telescope has revolutionized the way telescopes operate.

The camera of this telescope also boasts numerous inventions. It has the first-ever curved CCD/charge coupled device which ensures that the image is crystal clear no matter how wide the view or field is. Regular digital cameras contain flat CCDs and cannot record distortion-free images from curved mirrors. The telescope’s camera also has the world’s fastest shutter that can take thousands of pictures within one night.

Also See: DARPA wants to use Unmanned Surveillance system to monitor The Arctic

The telescope can view objects in the entire solar system and the universe outside the solar realm apart from observing the Earth. This would help in getting information about any objects or asteroids reaching close to the Earth. It is definitely the need of the day given the fact that there were 2.2 million asteroid sightings in 2014 and 7.2 million in 2015. In 2016, the figure is expected to reach 10 million. The telescope has already identified 3,600 asteroids and 69 objects that are getting closer to Earth. Four of them might hit the Earth.

“With its amazing capabilities, SST joins a prestigious list stretching back decades of game-changing space situational awareness programs on which DARPA and AFSPC have collaborated. DARPA looks forward to seeing what the Air Force will do with the SST and we will continue to work with them as DARPA pushes the technological envelope on space situational awareness with our Hallmark and OrbitOutlook programs.”