DuckDuckGo is an Internet search engine which has been experiencing phenomenal growth culminating in the company hitting a milestone of 14 million searches in a single day and 10 billion searches overall.

What’s more remarkable in this growth story is the fact 4 billion of those 10 billion searches were made in just one month – December 2016. It is no wonder that the team behind DuckDuckGo are in jubilant mood. 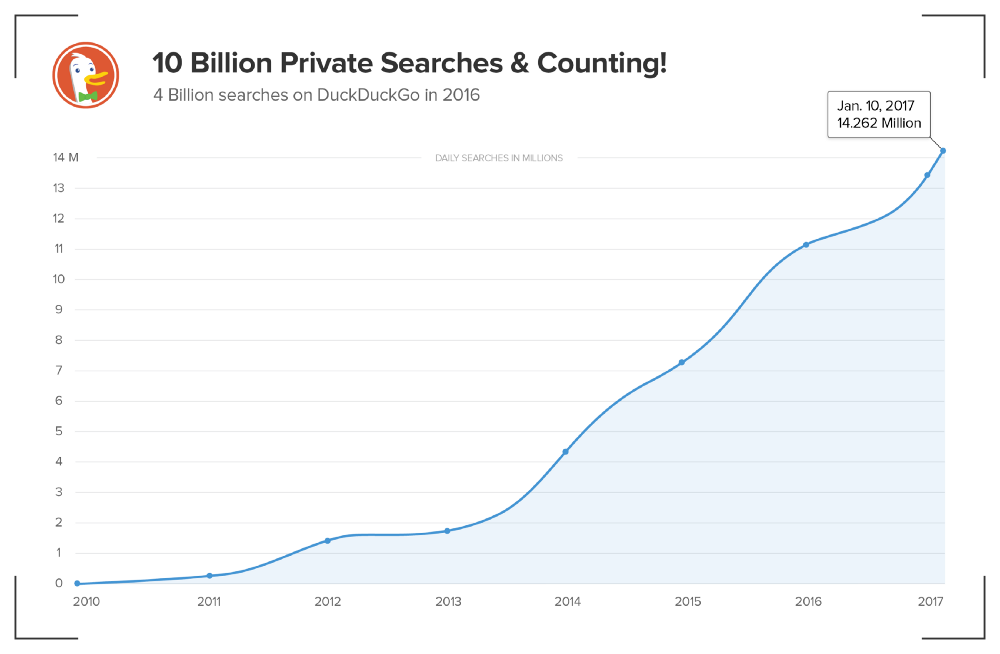 “We are proud to say that at the end of last year, we surpassed a cumulative count of 10 billion anonymous searches served, with over 4 billion in 2016! We are growing faster than ever with our first 14M day on Jan 10, 2017,” stated Gabriel Weinberg, CEO & Founder, DuckDuckGo.

Read More: Learn how to download and delete your searches from Google Search

The fiercely competitive nature of the sector in which DuckDuckGo operates makes the growth all the more remarkable. It is no easy feat taking customers away from the likes of Google. When asked about the catalyst for such growth in a fairly saturated market, DuckDuckGo muted that it owed the growth to public fear and concerns pertaining to their individual privacy and the privacy of their data/searches.

Skepticism regarding a company’s ability and/willingness to protect public privacy is another reason DuckDuckGo cites for its recent growth.

DuckDuckGo is not alone in their assertion, they are backed up by Pew Research who conducted a study which found that some 40% of internet users believe that a search engine provider “shouldn’t retain information about their activity”

The official slogan of DuckDuckGo is “The search engine that doesn’t track you.”

Privacy and Transparency are the USP’s (Unique Selling Points) of the search engine and are key elements in the search engines privacy policy. It is this USP which is being credited with its recent growth. Users of DuckDuckGo can search on the platform comfortable in the knowledge that the company is not tracking their usage, searches or monitoring and recording their activity.

So transparent is DuckDuckGo in the way it operates, it has assumed a leading position in transparency league tables of search engines currently active on the internet.

DuckDuckGo is not merely content with raising privacy standards for itself; it is dedicated to improving the privacy of users in general. This is highlighted by the fact DuckDuckGo recently donated $225,000 to 9 organizations who are privacy-focussed.

The company is always looking to aid companies who have privacy as a central tenant of their policy. DuckDuckGo has the vision of wanting to be the most trusted search engine in the world which may explain the companies obsession with transparency and privacy.

“We are grateful to be able to make such donations yearly to serve our vision more broadly, and are working on considering donations for the New Year right now,” explained the company in an official statement.

So give DuckDuckGo a go and download their app on Android and iOS.

The Pirate Bay is down; here are its best alternatives

You are not alone, The Pirate Bay is down for everyone for over 7 hours. If you are…
byWaqas