Electronic Arts (EA) servers are down; Users are angry (Updated)

Users are tweeting that Electronic Arts (EA) servers are down — A recent tweet from EA says they are aware of the issue.

Electronic Arts (EA) users in Europe and the US are reporting that they are facing connectivity issues that won’t let them sign in, connect to the server or play games.

A tweet from EA shows that the company is aware of the issue.

“We are aware of the intermittent connectivity issues at present and are investigating. Apologies for the inconvenience.”

We are aware of the intermittent connectivity issues at present and are investigating. Apologies for the inconvenience.

It is too early to comment if this is a technical issue or EA is suffering a distributed denial-of-service (DDoS) attack. In August this year, PoodleCorp group conducted a massive DDoS attack on EA servers forcing the service to go offline for hours.

Remember PoodleCorp did promise to DDoS BattleField servers on 21st October 2016, however, today is 20th October and one alleged member of PoodleCorp has already been arrested by the authorities. 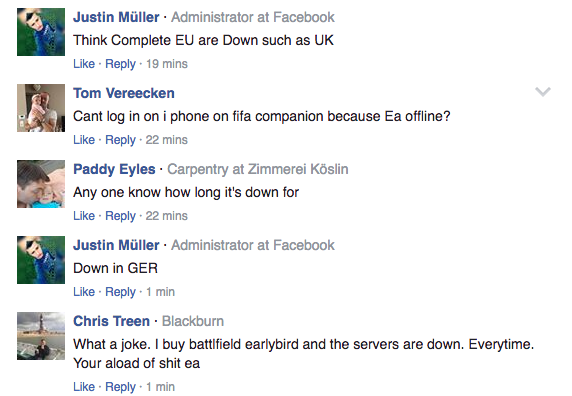 @EA are the servers for bf1 down? Im playing on ps4 and suddenly can't connect while im still connected to psn.

@Battlefield Hi..
I have a problem, I can not enter the game failed to contact to EA online (not able to connect to onlin).

@EASPORTSFIFA There's a glitch with my FUT champions….. Everytime I play that I lose connection with the EA servers….. Help me out here

At the time of writing this article, EA servers were down, however, we are keeping an eye on what’s going on. Expect an update soon.

The official support handle of EA claims the issue has been resolved and service is back, however, we are receiving tons of emails where users are complaining they are still not able to connect to the servers.

Connectivity issues have been resolved. Thank you for your patience.