This tool has been developed by the University of Cambridge and uses Facebook Likes data to estimate a person’s key psychological traits, and political/religious views.

Have you ever thought about the massiveness of your Facebook data?

It includes almost everything that you do on Facebook from the profiles you check, the amount of time spent on Facebook, your posts, shares, likes and whatever you type in your messages. This data helps Facebook create an image of your persona and this information is later used to customize the target adverts and News Feed on your Facebook page. 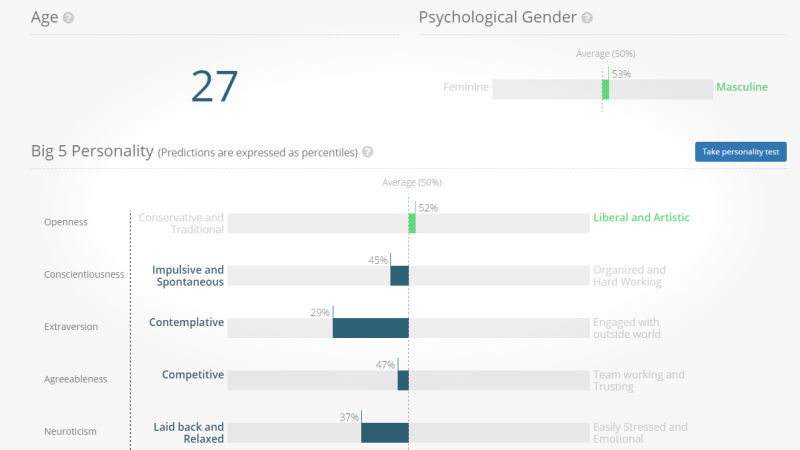 Among the data stored, there is a particular set of information that can reveal a lot about your real personality, which is the things you have liked.

The Psychometrics Centre at the University of Cambridge has created a tool based on this particular aspect of Facebook Likes. This tool uses only the Facebook Likes data to construct an image of your real personality.

Moreover, this tool observes you on spectra for the “Big 5” personality characteristics including conscientiousness, agreeableness, openness, neuroticism and extraversion. For instance, it reveals whether you are conservative or liberal and impulsive or organized.

This tool has been developed by researchers and not Facebook. However, it reflects the image that your activities on the social network tend to produce.

The app will request you to log into your Facebook account and will inform you that it will collect only the LikeIDs on your profile and will not store any data once the test is over. After logging in, the results will be shown.

The University of Cambridge offers various other tests on its official website, which you can take to know details about your personality and compare to the average.

Twitter is down in many countries across the globe – Hackread.com can confirm that Twitter’s app and website…
byWaqas
Read More
1 minute read