Coinbase is working to reimburse the customers for the funds they have lost and help them regain control of their accounts.

Coinbase Global Inc. has sent a breach notification letter to its customers affected by the cyberattack on the widely used cryptocurrency exchange. As per the letter, hackers managed to steal accounts of at least 6,000 Coinbase customers.

According to the letter posted on the Attorney General of California’s website, the hack occurred between March and May 20, 2021. The letter seen by Hackread.com states that unauthorized third parties identified and exploited a vulnerability in the SMS account recovery process of Coinbase and were able to gain access to the accounts. They transferred funds to crypto wallets that weren’t associated with the exchange, Coinbase clarified.

A spokesperson of Coinbase stated on Friday that the company immediately fixed the flaw and is working to reimburse the customers for the funds they have lost and help them regain control of their accounts.

Screenshot of the letter sent by Coinbase: 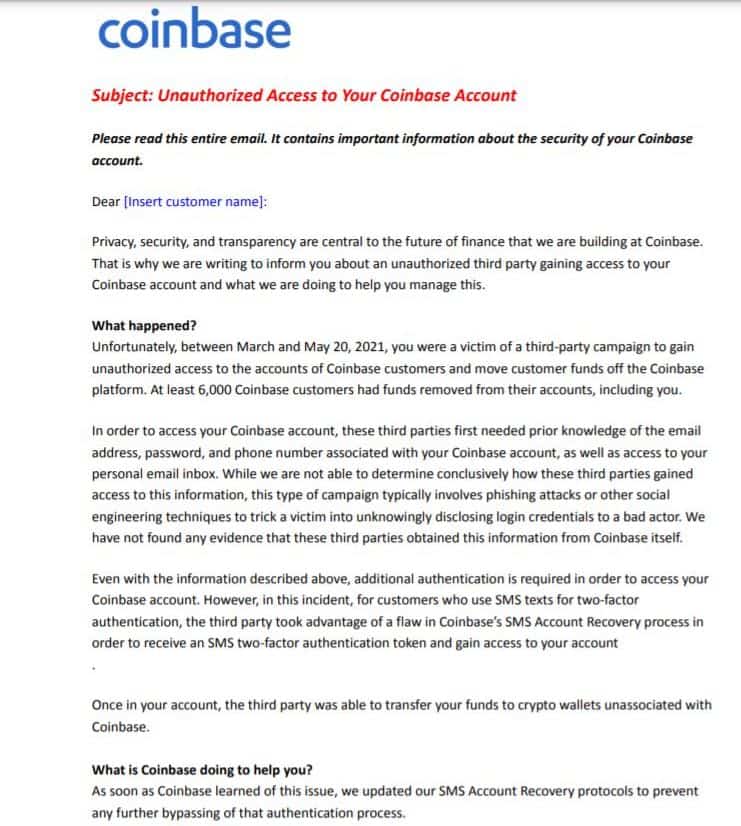 The letter further states that depending on what information users have in their account, the “third party” who accessed their Coinbase account would have been able to view the following information:

For cryptocurrency users, if you are on Coinbase, consider using Coinbase Bot which is an easy-to-use bot that can be used by anyone with a Coinbase account. The bot connects to your Coinbase account and makes trades for you based on the strategies you have set up.

As for the hack, the exchange aims to deposit funds into the customers’ accounts “equal to the value of the currency improperly removed from your account at the time of the incident.”

Furthermore, Coinbase Inc. has initiated an internal investigation as well as working closely with law enforcement to find out who’s behind the hacking.

The JokerCracker hacker has hit another site, this time has breached into the site of Press News UK (thepressnews.co.uk) and leaked 600+…
byWaqas