Privacy advocates are not happy with new Hello Barbie toy for kids – Researchers claim the Barbie with ability to have conversation with kids actually records, stores and sends conversations to the company’s headquarters in real time via wifi connection.

Mattel, Inc. an American toy manufacturing company has introduced a new toy for children called Hello Barbie. It can communicate and record conversations. The conversation is sent to company’s servers, analyzed and stored in the cloud.

The toy is totally futuristic and apparently seems perfect for the gadget-savvy generation of our time. 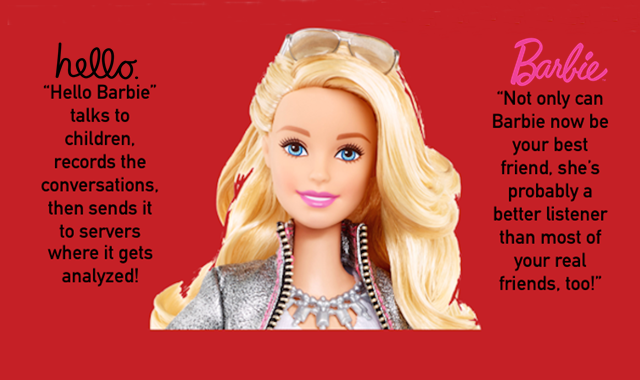 Previously, our homes used to be sacred areas where letting government create a direct link by recording everything that is being spoken around the household would have appeared profane if not all-out Orwellian.

However, presently we are inspiring kids to do this and the act of recording audio is being used as a profitable business model. As Edward Snowden identified, kids of our age will have no idea about privacy.

Another inter-linked story is about the way a rental company called Hertz Car has installed cameras in the cars to record the passengers. Moreover, in another news piece it was revealed that the CIA has collaborated with the DOJ for installing “dirtboxes” on tiny fixed wing aircrafts that fly across America. As soon as the target phone is identified by this device, the aircraft circles overhead till the time the device can locate it, usually within a 10feet area.

Considering these latest news, various law-enforcement officials are worried about the fact that this aerial surveillance of mobile phone signals will blur the boundaries of conventional police working mechanisms and the technology and tactics of spy work oversea. That’s actually the key.

The technologies that were previously utilized only for locating terrorists in a hunter killer situation are now being used against American citizens now.

Watch this video and experience the creepy conversation and replies by Hello Barbie.

Bloomberg has also shown their concerns about the Hello Barbie spying.