Signal messenger has introduced a new tool that lets users blur their faces.

With the news of NSA tapping various online services and telecom networks years ago, users have since become much more concerned about what they share online. This has naturally led them to move towards several privacy-centric apps that would not compromise on their security regardless of what a government of the day may demand.

One such app happens to be Signal Messenger which is used primarily by journalists, activists, and those in other high-risk jobs. It offers a range of security features including end-to-end encryption (hello WhatsApp), disappearing messages (hello Snapchat), no tracking, and hiding metadata along with being open source.

Just recently, though, Signal Messenger has added another very important feature that allows users to blur images before sending them via messages on both iOS and Android. This will happen in two ways primarily:

Firstly, the app is utilizing “platform-level libraries” to automatically detect faces in a picture but this isn’t guaranteed to work every time.

The second option is to use a “blur brush” through which you can manually blur faces by drawing over them.

As for the image processing, it will be done completely inside the app so that no data is transferred to any outside server removing any possibility whatsoever of a data leak.

See: These Anti-Surveillance Tools Will Protect Activists and Their Privacy

The key question nonetheless is, how is this useful considering that signal messages could not be intercepted before either and so there may be no strong need to blur them?

The answer lies at the heart of the recent protests in the US commemorating George Floyd. You see, when spectators or even protestors themselves share photos of their fellow protestors, this can help law enforcement agencies to identify them and later track them down for investigation. 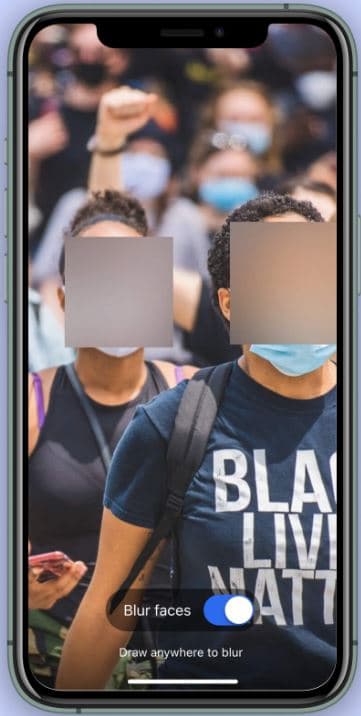 Yet, if those photos are blurred using Signal, the implied message of activism can be sent across but at the same time, there would be no tracking. This is best understood through the words of Signal’s founder Moxie Marlinspike who stated in a blog post that:

Many of the people and groups who are organizing for that change are using Signal to communicate, and we’re working hard to keep up with the increased traffic. We’ve also been working to figure out additional ways we can support everyone in the street right now.

To conclude, you may find other tools that do the trick as well but the main point of this feature is that it does so in a very simple way without getting technical.

Finally, if you are a part of the ongoing protests, it might be a good time to start using it and also recommending it to family and friends.