Indians could face jail time for torrenting and file sharing

It looks like the whole world is going after Torrent websites. Beginning with the shutdown of Kickass Torrents which led to the arrest of its owner Artem Vaulting to the farewell of Torrentz.eu. it’s war on Torrents.

Viewers in India were shocked to witness a warning message on several Torrenting and file sharing sites earlier today, informing them that the domain they are trying to visit has been blocked by the “Competent Government Authority” and that viewing or downloading an illegal content can send them to prison for 3 years and also a fine of 3,00,000 Indian Rupees (around 4,464) US Dollar.

“This URL has been blocked under the instructions of the Competent Government Authority or in compliance with the orders of a Court of competent jurisdiction. Viewing, downloading, exhibiting or duplicating an illicit copy of the contents of this URL is punishable as an offense under the laws of India, including but not limited to under Sections 63, 63-A, 65 and 65-A of the Copyright Act, 1957 which prescribe imprisonment for 3 years and also fine of up to Rs. 3,00,000/-. Any person aggrieved by any such blocking of this URL may contact at urlblock@tatacommunications.com who will, within 48 hours, provide you the details of relevant proceedings under which you can approach the relevant High Court or Authority for redressal of your grievance.”

Full preview of the screenshot from a file sharing site Bigfile.to: 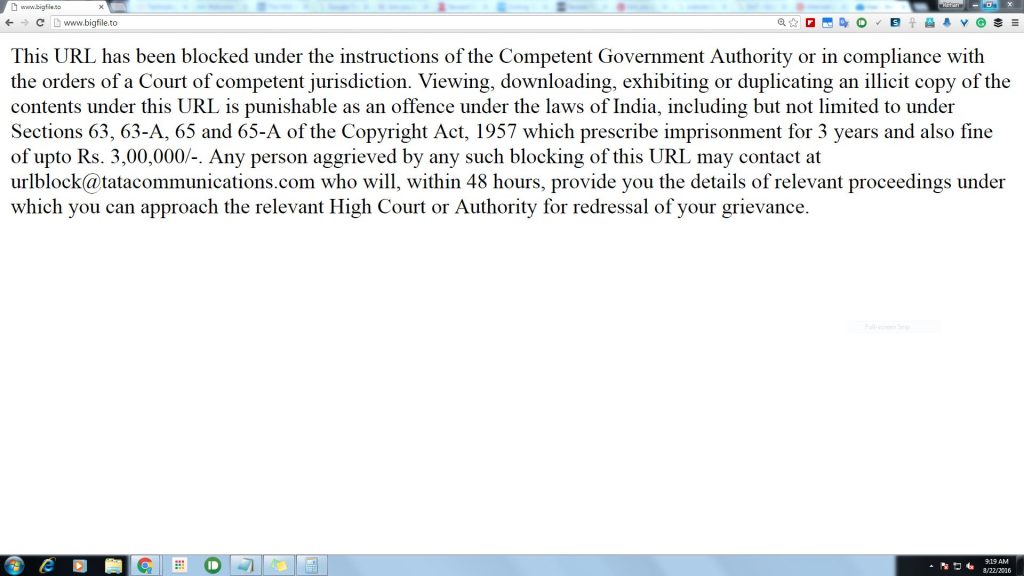 Another site Extratorrent.cc that provides users with an option to download torrents for the latest movies, TV shows, music, anime, adult, mobile, images, software, books and games was also showing a similar message:

“Your requested URL has been blocked as per the directions received from the department of telecommunications, government of India. Please contact administrator for more information.” 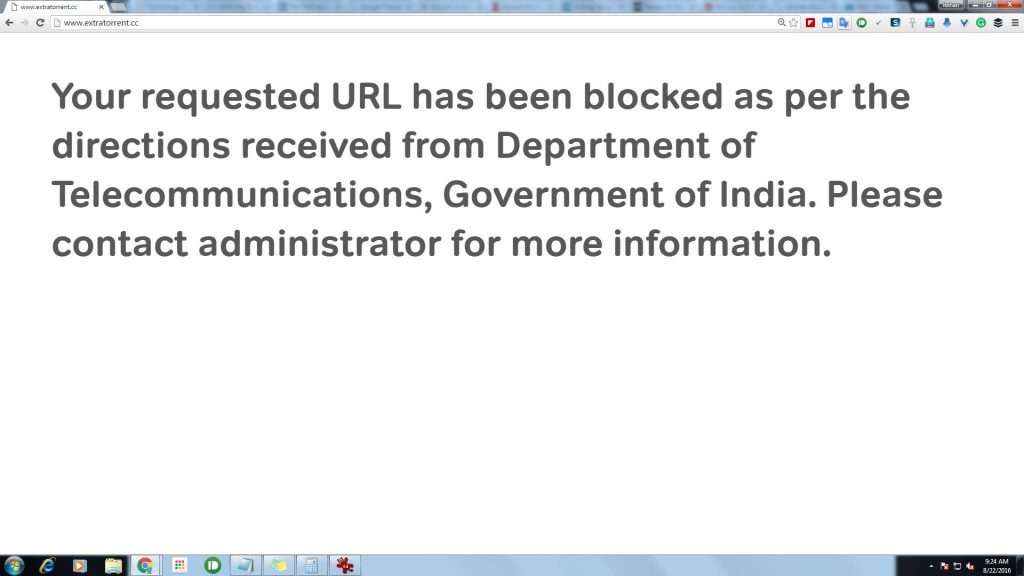 India Today reported that Bombay High Court recently asked internet service providers in India to not just block URLs but also explain to users why the URLs are blocked and possibly warn them of consequences of illegally accessing copyright work.

Although wordings used in the aforementioned notices doesn’t clarify if “viewing” the site is also crime however one thing as clear as crystal that for now if you download videos from torrent sites you will face trouble such as jail time and or a fine of 300,000 Indian Rupee.

This is not the first time that the Indian government has blocked such sites. On May 3, 2012, Torrentz and The Pirate Bay were blocked by Reliance Communications after receiving orders from the Department of Telecom. In return, Anonymous hacktivists hacked Reliance servers and warned the telecom giant to restore the sites’ access.