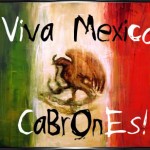 Mexican hackers have put its Government to shame on the independence day. In their recent attack on the government owned websites, the Mexican hackers who called themselves ”Ciber Protesta Mexicana” have taken control of  more then dozen websites associated with local government bodies, Ministries and different political parties.

Hackers posted messages with heavy criticism on the government on the independent day.

Mexican Federal Congress’s TV, National Action Party branch in the Yucatan, Government-owned National Auditorium and the Southeastern Mexican town of Macuspana are among the list of hacked websites.

Hackers left their offical deface page along with a message criticizing the Government against the violence in Mexico, the electoral institute’s certification of July 1 election results and what it says was the imposition of President-elect Enrique Pena Nieto.

And you, you have something to celebrate?

As we saw Mexico is undergoing a series of changes, changes that will get us anything new that we will be in the same situation as before, as the PRI always imposed a regime, a regime of violence, links to crime, fraud If, as the elections!business groups as Soriana, “EFRA” Monex, among other took the worst of whether to agree with this theft of democracy in Mexico, in which the IFE is also muddy, and by which we must be in oppression as what we are looking for 6 more years, until the people actually claim what is yours, vote!

they still have like celebrating? it seems that other nations give them grief, if! shame, shame join the next “President of Mexico” clear imposed president.
Since Latin American representatives rejected our next president and were counted if accepted, counted with three fingers.

Now they want more?
President Calderon was not enough to stop debt (if more debt) to Mexico, but it is now retiring as grades, with a totally exaggerated sum annuity earning more than 2 million pesos a year, this guy that is called president, intends to follow even stealing to Mexico? after robbing tranquility, thanks to its drug war the country is experiencing a wave of violence and fear as he had lived, thanks to him, “the president of employment”, there is more unemployment than in previous governments, which gasoline at fault does not finish up being that Mexico is among the 10 largest oil producers in the world, this 2012 market basket rose more than 25% and the minimum wage, the minimum is because in some offices even does not exceed the limit of 60 pesos.

why Mexicans, you really want to celebrate the independence of Mexico with pride? pride is to have economic stability, good education, access to information and transparent with no patches, right to medical treatment for all, calmly walking our streets today that you have to watch until the authorities do not have to be with the anxiety if our children eat today, or worse, if they return to their schools or good works, that. Esooooo is celebrate Mexico!

This is a peaceful protest cybernetics, we are not and never will be anonymous, we Ciber Protest Mexican, we’re not criminals, we are students, workers, productive people to Mexico that we’re tired and we seek a means of expressing our disagreements

List of hacked websites left by the hackers on all the deface pages:

At the time this article was written, all the websites were still hacked and showing the deface page uploaded by the hackers along with their message.