Microsoft Patent Regarding A Conversational Chatbot For The Deceased: A Question Of Ethical Standing?

Microsoft Patent Regarding A Conversational Chatbot For The Deceased: A Question Of Ethical Standing?

The amount of people who give in to the grief of a loved one passing away does make one wonder whether things would be different if the aggrieved could still talk to the deceased. Well, fortunately, or unfortunately, that is no longer a speculation today.

According to a patent that was filed in 2017 by Microsoft and only granted until this month, the idea of a conversational chatbot that brings a ‘past entity’ back to life does not seem too far off.

See: This man is creating chatbot for his mom so they can talk after she dies

The patent, invented by Dustin Abramson and Joseph Johnson, Jr. was titled “Creating a conversational chatbot of a specific person” and it describes a system that would use images, voicemails, social media posts, electronic messages, and similar data to ‘create or modify a special index in the theme of a specific person’s personality.’

In fact, additional data such as video or audio recordings could be used to apply voice and facial recognition algorithms to make a 2D or 3D model of the person to enhance the chatbot.

This system would not only allow the users to converse with the departed but also revisit the momentous events in their lives and call them occasionally. This could be done through their laptop, their cellphone, or even Alexa or Siri.

While conversing with the chatbox, if the user asks a question that cannot be answered by using the social data of that person alone, the AI would then use machine-learning processes to construct logical and likely responses. 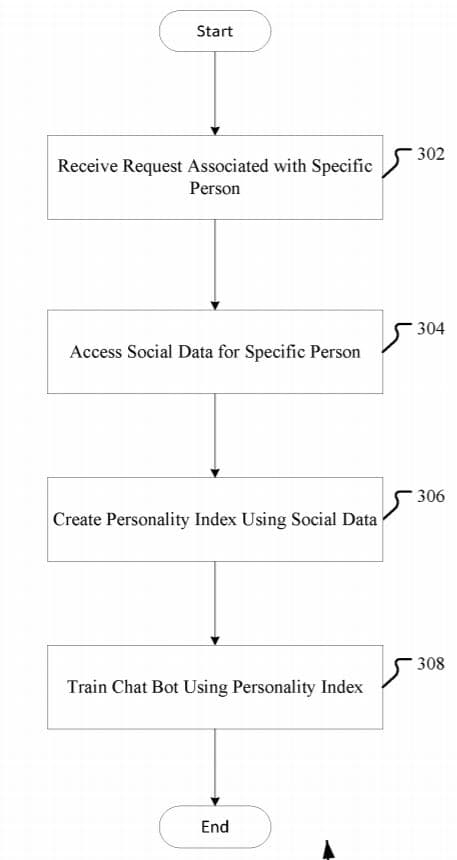 According to the patent, that could be achieved by relying on “crowd-based perceptions” and “psychographic data.”

As disturbing as the idea may appear to seem at first, there would be a lot of people who would pay any amount of money to be able to use a system such as this. After all, who does not want to exchange a few words with one’s loved ones just to keep their memory alive?

However, Tim O’Brien, general manager of AI programs at Microsoft, confirmed through a tweet that “there’s no plan for this”.

Ya, I get it, no worries. At any rate, confirmed that there’s no plan for this. But if I ever get a job writing for Black Mirror, I’ll know to go to the USPTO website for story ideas.

The application of the patent was filed in April 2017 which, according to Tim O’Brien, predates the “AI ethic reviews we do today” as mentioned in a tweet. Nowadays, Microsoft has an Office of Responsible AI and an AI, Ethics, and Effects in Engineering and Research Committee which oversee these matters to make sure no violation is being done.

Nevertheless, while the company has no plans for such a creation, the patent does mention that the focus of AI has moved from creating fake people to create virtual models of real people. This article will explain to you how to create ISO files from discs while mentioning 3 top ISO creators which are easy to understand and use;
byOwais Sultan

iMessage is an application developed by Apple Inc. for facilitating instant message sending across iOS devices. It lets…
byCarolina