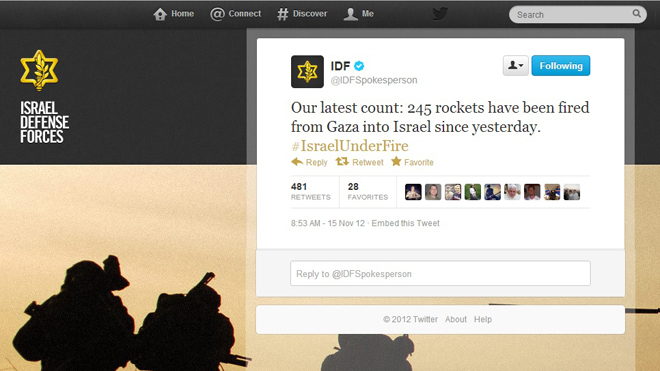 Now, the battle waged by both sides also extends to social networks. Israelis and Palestinians are increasingly using sophisticated methods in an attempt to win support on Facebook, Twitter and YouTube.

While Hamas Guides Palestinians to publish photos of wounded on social networks, Israelhas created an application that simulates what if Gaza were in your country.

The networks are being flooded with posts aimed at winning hearts and minds of people in the Middle East and the rest of the world.

On Twitter, war occurs in versions of official accounts of the Israel Defense Forces (IDF) and the Izz al-Din al-Qassam Brigades, the armed wing of Hamas. Since the battle began on 8th July 2014, the Israelis already posted dozens of real-time updates. They even have a “rocket counter,” which accounts for missiles fired from Gaza. The account of the English arm of Hamas also posts updates about Israeli attacks and reports on their rocket launches, minimizing the accounts of the Israeli Army.

The Izz al-Din al-Qassam maintains accounts on Twitter in several languages, including Arabic and Hebrew – all of them have been suspended at some point.

With the hashtags # GazaUnderAttack, # Gaza, # StopIsrael, and # PrayForGaza, the account of al-Qassam highlights the plight of civilians.

The two sides increasingly post images in order to prove their version of events, and prove each other liars.

The IDF set up an application, available on their blog, which lets you position the Gaza Strip in different countries, like the United States or the United Kingdom, and predict the damage that would be done by missiles. The professor of communication at Central European University and the University of Washington Philip Howard says that Hamas and Israel know they have a large audience, but most of their followers are overseas.

“The most important part of the public, strategically, are the journalists who follow their accounts. They know that a well-placed tweet can help change the coverage,” he adds.

He said Hamas has become more sophisticated in the use of social media for two reasons.

“First, they want to reach journalists and leaders in the West. Also, try to keep the engagement of young Palestinian sympathizers who can currently not see Hamas or the Palestinian Authority “as their best or only option,” he says.

Both the IDF and Hamas exploit pictures and videos of the destruction and death caused by violence.

Hamas put more graphic images on its Twitter feed, including the bloodied bodies of children who, according to them, were killed in Israeli air strikes. A video posted by the IDF on its YouTube account titled 15 Seconds: not enough time compares the time that athletes take to run on a running track and the time that Israeli civilians have to find a shelter when rockets are launched from Gaza.

The caption of the video says: “During a rocket attack, the Israelis who live near Gaza’s only 15 seconds to reach a bomb shelter, even the fastest man in the world would not arrive in time.”.

Hamas, however, reached the Israeli public for the first time with the launch of a type of music video sung in Hebrew and Arabic video, according to AFP news agency.

The video, called Shaking the Security of Israel, shows Hamas making, carrying and launching rockets against Israel in an attempt to stand against the Israeli government.

There are also reports that Hamas hackers have hacked the Facebook page of Domino’s pizzeria in Israel and notices published in English, Arabic and Hebrew. Hackers have written: “Today we will launch in Israel, Tel Aviv, Haifa, Jerusalem, Ashkelon, Ashdod more than 2,000 rockets Let’s start at 7pm Countdown to the end of Israel … Be warned..”

Another report says Hamas hacked the satellite communication of the Channel 10 TV station of Israel and replaced the transmission with images of Palestinian citizens affected and wounded by Israeli air-strikes over Gaza Strip.

The IDF has also issued frequent warnings to the Gazans online.

In a recent tweet, he wrote: “To warn civilians of imminent attack, the IDF plays brochures, custom makes phone calls and send SMSs How many soldiers do.?”

Meanwhile, Hamas officials offered guidance on the use of social media by civilians in Gaza, in a video posted online.

In the video, civilians are advised not to publish pictures of rocket or missile in central Gaza and always mention “innocent civilians” when writing about victims.

“There is nothing wrong with publishing images of the wounded,” he adds.