It was just an hour ago when we updated you with a successful cyber attack on the official website of Philippines’ Maritime Industry Authority (DENR), now in another hack attack that took moment ago, the official website of Philippine’s Department of Environment & Natural Resources has been hacked by a Turkish Hacker for #OpPhilippines against the National Cybercrime Prevention Act.

After the deface, The homepage of the website was displaying a message, “Sorry Admin, Hacked!” and a symbol of a crescent moon and a star, which is a found on Turkish flag and commonly used by Turkish hackers as their deface page.

The National Cyber-crime Prevention Act has already been criticized all over the world. Miriam Defensor Santiago, who is a is a Judge-elect of the International Criminal Court and a member of the Senate of the Philippines described the act as an act to put a tap on freedom of information that  dangerously limits the growth of the marketplace of ideas, Therefore, it is presumed to be unconstitutional. But in addition, the law is unconstitutional, because it uses language that is overboard  and language that is too vague. In other words, it violates the over breadth doctrine and the void for vagueness doctrine in constitutional law”. 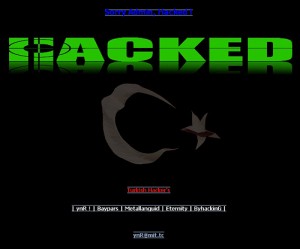 However, the government of Philippine has also responded to the latest cyber attacks on the government-owned domains, in a latest statement by a spokesman of DENR, ” This is not a good way to register their protest”.

It seems that government of Philippine will keep on facing the tough time against it’s latest cyber law act of 2012, this is not the first time when a government owned domain is hacked, in last couple of week, the website of Philippine National Police, website of Agusan Del Sur province, the website of Metropolitan Waterworks and Sewage System (MWSS) , Philippines’ Maritime Industry Authority and several other websites were hacked and taken down against the cyber crime law.

At the time of writing this article, the website was restored and working online.