The email apparently is sent from the popular messaging service WhatsApp and claims that you have received an audio recording.

A malicious email claiming to be sent by the messaging service WhatsApp is actually a malware. The email’s subject line contains a name that has been derived from your email address’ first portion and a randomly generated first and last name of the supposed sender.

Also attached to the email is a .ZIP file, which seems to be containing the promised audio recording. In reality, this .ZIP file has a malicious file, which when opened installs a malware on your computer.

Here is an example, we have removed some content from this email: 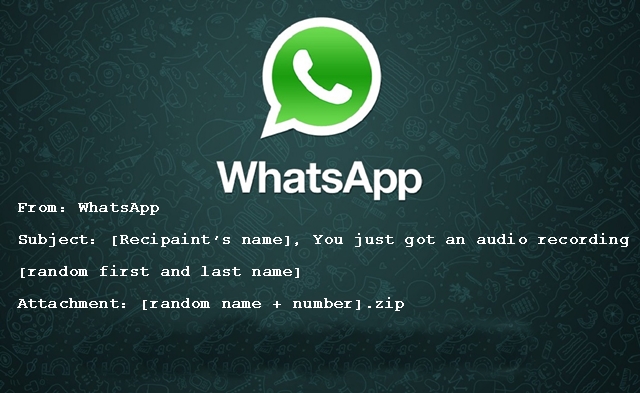 After installation, the malware downloads additional malicious software and also steals sensitive personal data like the passwords you have stored on the system.

This malware also allows cybercriminals and attackers to fully take control of the computer and conduct criminal activities.

So beware and keep your eyes open before clicking or opening such emails.