Wikileaks is known for leaking data that may be impossible to get your hands on otherwise, but on 6th Jan 2017, in now a deleted Tweet from the official and verified Wikileaks support account it was stated that the organization was “thinking of making an online database with all “verified” twitter accounts & their family/job/financial/housing relationships.”

It is unclear how this database would be built or why there is a need to do such thing – but building any database containing “family/job/financial/housing relationship” is a terrible idea. It would fast become a privacy nightmare. In later tweets, it seems like the supporter account was proposing a database for mapping networks between influential people and presenting those graphically. Either way, WikiLeaks should stay in their lane and refrain from such proposals leading to strong criticism on the Internet. 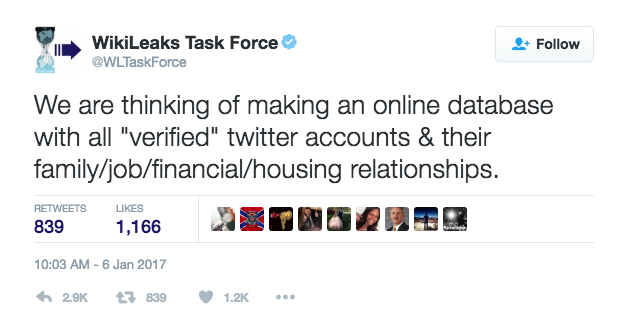 WIKILEAKS: "We need to transparency to avoid 1984! And to achieve that goal, we are making a database of everyone's intimate details."

Later on, after criticism from several Twitter users, the same Wikileaks Support Account tweeted that “dishonest press reporting” its “speculative idea for a database of account influencing *relationships* with WikiLeaks doxxing home addresses.”

One can only conclude that the volunteer meant to tweet “confusing” and not “influencing” or they meant to say that they were never even contemplating doxxing verified accounts. They were thinking of mapping relationships between accounts, which is something dozens of companies do today. That, of course, includes the masters of such activities, namely Facebook.

A tweet from @Safety account owned by Twitter itself clearly stated that “Posting another person’s private and confidential information is a violation of the Twitter Rules.” Twitter usually suspends those accounts found guilty of threatening people’s privacy by leaking their data. However, it is unclear if @Safety’s tweet was a warning to WikiLeaks or it was just a general tweet for everyone using the social networking service.

Now, the question is how the WikiLeaks TaskForce account is run today. The TaskForce seemed to be a good idea last year, but the forces that oppose Wikileaks are critically looking at everything connected to them. Having (possibly) young volunteers tweeting at tens of thousands might not be the best idea right now.

The environment is so toxic that steady hands and people with more life experience should act as editors. When you have intelligence agencies and millions of people looking to catch you doing anything stupid, you better tweet ever so carefully – or face the serious fallout.