A recent survey suggests the social media giant Facebook will be the biggest virtual graveyard by the end of this century.

By 2098, Facebook will become a digital cemetery. According to the American researcher Hachem Saddiki, Ph.D.candidate in statistics at the University of Massachusetts, more than 1.5 billion users will have more profiles of dead users than alive ones. 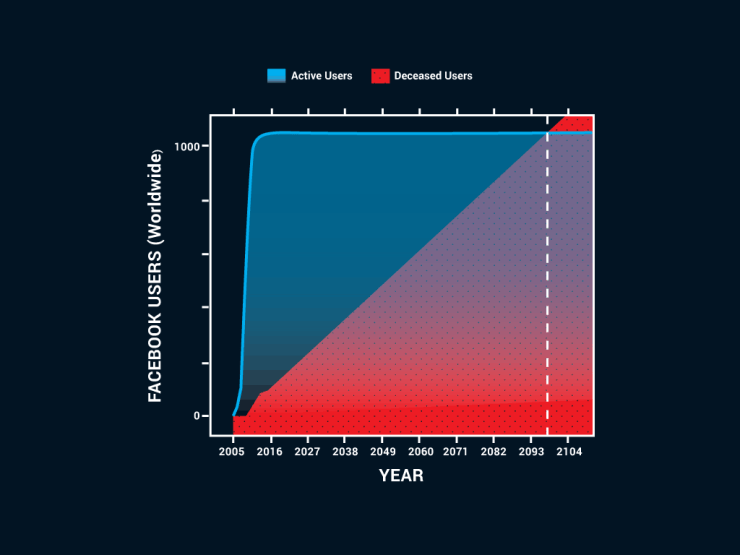 Saddiki had worked along with Fusion to model a projection based on Facebook’s growth, demographic data and death rates. The statistical model also predicts that soon, the growth of the social network will stagnate.

Today, more than 60% of Facebook users are under 35, and less than 5% are over 65. If the global network growth really stagnates, or if it loses the appeal among young people, the number of “dead profiles” could overcome the “living” ones even before the end of this century. According to the Digital Beyond blog, 972,000 Facebook users in the US will die only this year.

Upon death, their profiles can be transformed into a memorial by their families and friends, allowing them to share memories on the timeline and the conversion of an account into memorial can also help protect the account. Users can also choose a “legacy contact” which will manage their account when they pass away or alternately will inform Facebook to delete your account permanently.

Facebook says that they can’t provide anyone’s account login information, even in the event of death, because it would violate the platform’s policies. Therefore, only if someone has the password of those who died, it will be possible to permanently delete your profile on the social network.

But if no request is made to memorialize an account, it stays active, and birthday alerts will remain to appear and other memories, that could be, undoubtedly, very upsetting.