Twitter is down. Yes, the social media giant’s website and mobile apps are inaccessible at the moment.

Visitors to the website were greeted by a message telling them that “Something is technically wrong”. “Thanks for noticing,” the message reads. “We’re going to fix it up and have things back to normal soon.”

Mobile apps as well as the website, itself, appeared to be broken. Tweetdeck, Twitter’s other official client, was also broken. 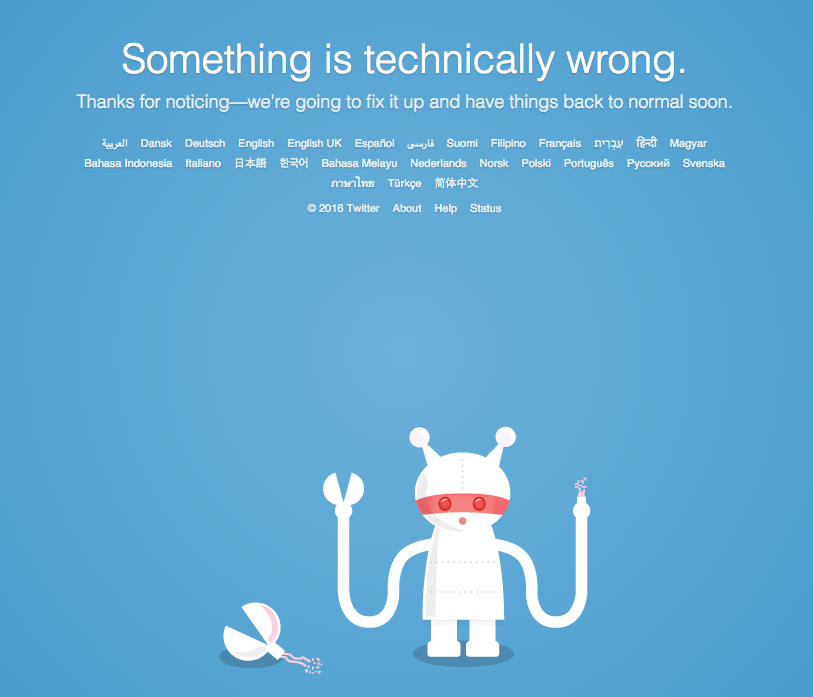 Twitter’s @Support account posted a message saying that “Some users are currently experiencing problems accessing Twitter. We are aware of the issue and are working towards a resolution.” (That account is itself part of the outage, but Twitter sent the text of the tweet to The Independent.)

Twitter’s official status page didn’t show any information about the outage, at the time of publishing, though it is often slow to update. But the Down Detector website showed a huge spike in reports on Tuesday morning UK time.

Twitter’s API status page, which is made for developers, showed that there were problems with most parts of the site. Just after 8 am UK time, the performance dropped off massively, the site showed, and the page said that there was “Service disruption”.

The site also showed that the site had problems through the night. A major outage was reported around 19 hours before the current problems arose.

The problems appear to be worldwide. The Down Detector website showed that most of the reports were coming from the UK and other parts of western Europe, with some reports on the East Coast of the US — though that might be more to do with the time elsewhere than the spread of the outage.

In the early days of the site, users were often met by the “fail whale” — a drawing that meant the site has broken. But it has become much more reliable in recent years, tending to go offline much less often and come back up more quickly when it does.

Users in some parts of the world are reporting that they can access Twitter while some are still facing the outage.

@HackRead Yes, The API are still down Responding with 131 Error code

Users reported that Twitter went offline again for a couple of minutes. However, at the moment, it’s up and running.