Aqua-Fi is a technology based on lights and laser beams.

Aqua-Fi is a new technology based on lights and laser beams developed by Saudi Arabian researchers that would let you use the Internet underwater – Soon.

The internet has become a mandatory part of our lives. Not matter if we are airborne or on the ground, we want to stay connected to the internet. But what about when we are underwater? How can we use the internet underwater since this domain has still been an untouched one?

Maybe, we can use internet under-the-sea.

After conquering the world above the ground, now the internet is all set to invade the underwater world thanks to the innovative new system developed by researchers at King Abdullah University of Science and Technology, Saudi Arabia.


Researchers claim that optical networks have the capability to deliver the internet under the sea. Their developed system serves as a WiFi booster for deep-sea divers, helping them to transmit real-time footage and images to computers located on the ground.

The system is dubbed Aqua-Fi. It uses radio waves for transmitting data from a diver’s smartphone. The diver has a Raspberry Pi device attached to their underwater gear, which receives the data from the smartphone and transfers it on the surface. Using Aqua-Fi divers can also talk without relying solely on hand signals.

A prototype was tested by the researchers, which could send messages via lasers and LEDs indicating that laser beams can help in transferring data from an underwater device to a computer on the surface that processes the incoming data to translate them into images and videos. 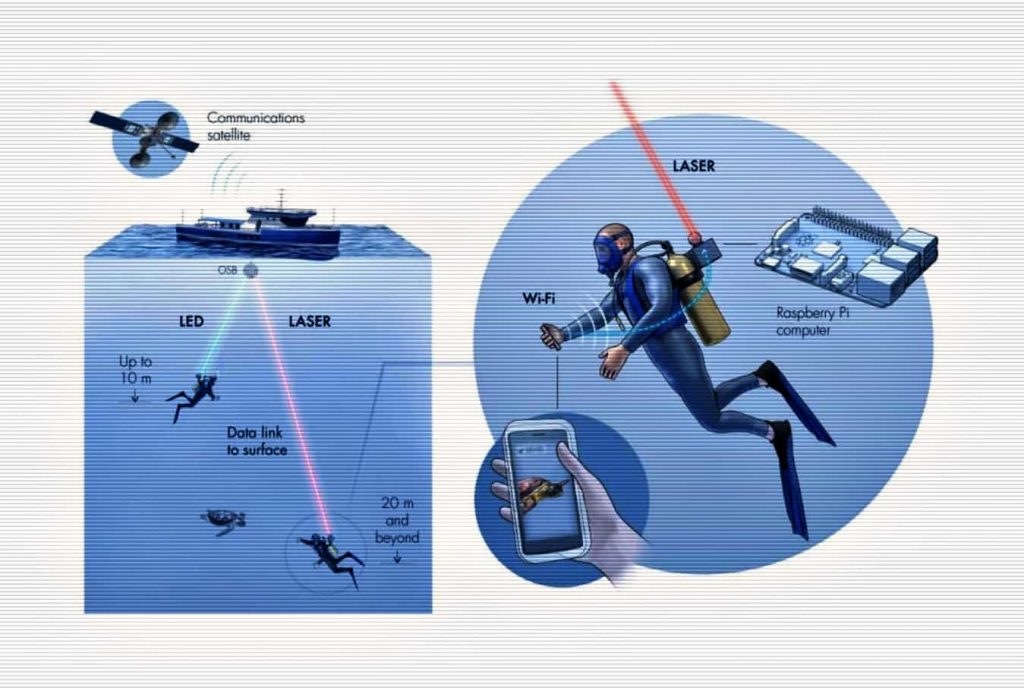 The revolutionary system can upload and download multimedia between two computers on the condition that both should be set at a distance of a few feet in static water. The data transfer rate is 2.11 megabytes/second with an average delay of 1.00 millisecond for one round trip.


Aqua-Fi acts just like a signal booster to transfer the data to a computer located on the surface using a light beam. The computer is connected to the internet through satellite, converts the videos and photos in a series of 1s and 0s, and translates them into light beams turning on and off at exceedingly high speeds.

Researcher Basem Shihada, who is part of the university’s research team, states that using this system both explorers and industrial sectors can monitor underwater environments in great detail. This is the first of its kind wireless underwater internet system and they are working on improving the link quality and transmission range.

“We have created a relatively cheap and flexible way to connect underwater environments to the global internet. “We hope that one day, Aqua-Fi will be as widely used underwater as WiFi is above water” Shihada said.

The findings are published in June’s edition of IEEE Communications.

GOOGLE NEXUS 4 Review, Specs & all you should know

After a series of rumors, leaks and the hurricanes Google nexus 4 finally arrived in the market on…
byWaqas