Private records of millions of patients could be at risk following the breach.

Security experts have been warning about expected cyber-attacks on healthcare industry since last year’s huge hack-attack on Florida based Medicaid in which private data of nearly 30,000 patients were exposed…. and we have another victim already.

According to a DailyMail’s report, cybercriminals have managed to breach the security of America’s leading clinical laboratory and medical diagnostics center LabCorp that can put health records of not thousands but millions of patients at risk. The breach occurred over the weekend during which hackers tried to steal private medical records of patients, which led to a forced shutdown of the LabCorp network.


Company’s inside sources revealed that the senior managers had information about the security breach of the Fortune 500 company and its online operations across the USA are paused since Sunday morning. As per the company’s technology experts, the system will soon be back online after the attack.

In its filing with the Securities and Exchange Commission, LabCorp stated that the attack was identified on 14th July after which its systems were immediately taken offline to respond to the “suspicious activity.” LabCorp spokesperson states that there isn’t any evidence of an unauthorized transfer or exploitation of medical records that belonged to the company.

The Burlington, North-Carolina based LabCorp has informed relevant authorities and has offered full cooperation in the investigation. The breach, states LabCorp in its official statement, did temporarily affect the “test processing and customer access to test results” services.

Currently, the tech experts at LabCorp are busy in restoring the functionality of the entire system; while testing operations have already been restored but other systems might take a few days’ time due to which customers might experience a delay in results delivery.

LabCorp’s website states that the company facilitates over 115m patient encounters on an annual basis and a security breach would mean that the records of all the patients are at risk. It is responsible for performing routine and specialty diagnostic tests including HIV tests, bloodwork and urine analysis.


The suspicious activity was discovered only on the systems of LabCorp and not on Coverage Drug Development system, which LabCorp bought in 2014 for $6.1m. Presumably, it would take weeks until LabCorp experts determine the exact extent and scope of the breach and whether the hackers managed to steal any data.

“The company acted swiftly to stop the intrusion, but the fear is the private medical information of millions of patients may have been accessed,” claim tech experts at LabCorp. The global security senior manager for LabCorp, Kevin Gunter, has not responded to requests for comments so far. This is a developing story so keep visiting this site for more updated on LabCorp security breach. 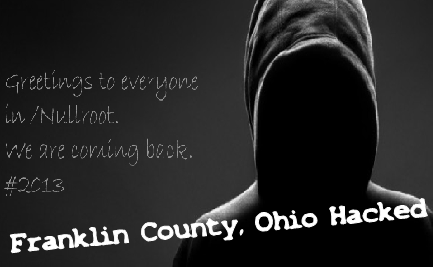 A hacker going with the handle of /Nullroot has hacked and defaced the official website of Franklin County, Ohio…
byWaqas