CracksNow is a prominent software uploader who appears regularly on torrent sites. However, recently the account of CracksNow was banned by several torrent sites while the uploader is accused of distributing GrandCrab ransomware.

See: The Pirate Bay malware can empty your Cryptocurrency wallet

It all started when multiple users complained about software and cracks plagued with ransomware after which CracksNow’s account was banned. This is indeed a rare incident because a trusted uploader has been distributing malware through the shared files.

Although the news isn’t too surprising because such P2P sharing platforms usually contain some malicious scripts but the fact that a reliable and well-known uploader is involved definitely raise concerns among the torrent users.

It is, however, relieving that torrent sites have listened to the complaints of their users and banned a renowned uploader having a huge following. This move has definitely strengthened the trust that users have on torrent sites. 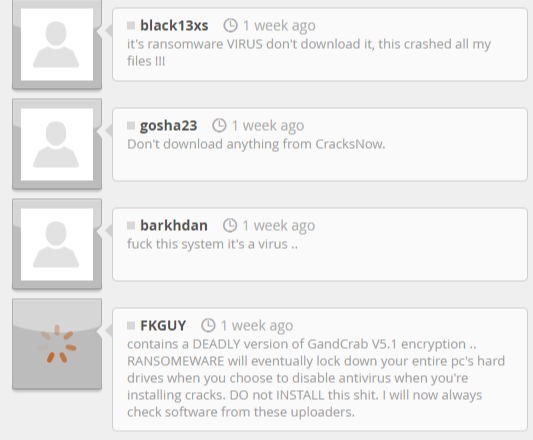 CracksNow used to share software tools and files on a number of torrent sites including 1337x, GIoTorrents, PirateBay, Demonoid, and TorrentGalaxy. The uploader has now been banned by all of these sites while the previously shared “clean” torrents from CracksNow haven’t been removed.

While speaking with TorrentFreak, 1337x’s senior admin and spokesperson stated that he also has banned the uploader after he identified fresh versions of GrandCrab ransomware in his shared files.

“CracksNow was a trusted uploader and had been warned in the past but only for misdemeanors.  To the best of our knowledge, the remaining torrents are ransomware free but his account is due for removal. I also checked the same uploads from him on a couple other torrent sites and got the same results. I immediately alerted their staff about it so they could investigate and take appropriate action, which they did,” one of the administrators of 1337x told TorrentFreak.

It must be noted that GrandCrab ransomware is among the most widely distributed malware pieces that is invading the P2P network platforms nowadays. Discovered in 2018, GrandCrab ransomware was found to be capable of encrypting the entire data stored on an infected system while also being able to blackmail victims for paying ransom in virtual currency in exchange of decryption key.

A widespread spam campaign was also identified last month where GrandCrab ransomware was being distributed through malicious Microsoft Word attachments in phishing emails.

CracksNow might be banned from popular torrent sites but the uploader can continue to share files through their own website CracksNow.com. When contacted, the uploader didn’t respond to the requests for comment on the recent developments. As the dates for the Black Hat and Def Con Hacking Conference are approaching closer and closer, we…
byFarzan Hussain