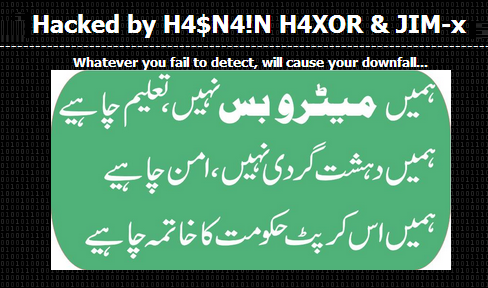 A Pakistani hacker going with the handle Hasnain Haxor from Pakistan Haxor Crew has hacked and defaced the official website of Pakistani consulate in Jeddah, Saudi Arabia against corrupt government in the country. Deface page left by the hackers

Hacker left a deface page along with a message on the homepage of the website, protesting against the ongoing corruption. The message was expressed in Urdu and English language.

Hackers also explained that their war is against the system and not against an individual.

Pakistani consulate deals with visa and residency issues faced by Pakistani in the Kingdom of Saudi Arabia.

At the time of publishing this article, the website of Pakistani consulate was restored and working online.