Uber, a private international transport company headquartered at San Francisco, announced on Friday that the company had suffered a massive data breach in 2014.

In a statement released on Friday, the company admitted that their website was accessed by an unauthorized third party and sensitive data of about 50,000 drivers were stolen.

The one-time breach occurred on 13 May 2014 and the data compromised included name and license number of some driver partners. The company changed the access protocols for the database once it discovered the breach in September 2014. 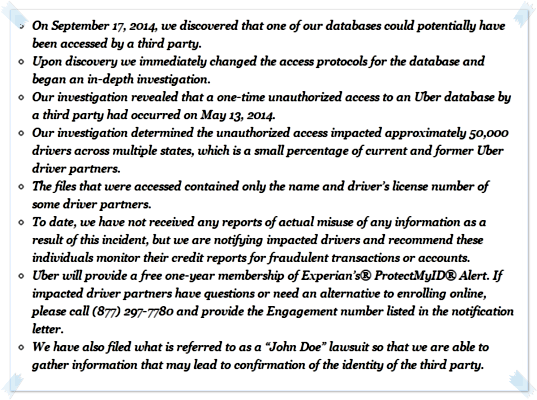 Uber has notified the impacted drivers and is providing a free one-year membership of Experian’s®  ProtectMyID® Alert. They have also filed a lawsuit to identify the third-party perpetrator.

“Uber takes seriously our responsibility to safeguard personal information, and we are sorry for any inconvenience this incident may cause,” said Katherine Tassi, Managing Counsel of Data Privacy at Uber.

Unstoppable Muslim hackers are taking down anything that is coming to their way, after hacking uncountable numbers of websites; another…
byWaqas