If you thought you have seen it all then you were wrong. In fact, thanks to Google Maps there are plenty of places that are kept hidden from the public view – It is also a fact that Google Maps has deliberately hidden these places.

But why? The reason for this censorship is mostly unknown, however, there are several conspiracy theories out there and it is probably a good idea to ignore them for now. Here are 8 places that you are not allowed to see on Google Maps

“House of Horror” in Cleveland, Ohio

According to BBC, Ariel Castro, the owner of this house kidnapped three women (Amanda Berry, Gina DeJesus, and Michelle Knight) and kept them captive for almost 10 years – The address of the house was 2203 Seymour Ave in Cleveland, Ohio which was destroyed by authorities back in 2013 but Google decided to keep it hidden from Google Maps users.

Babylon was known as a key kingdom in ancient Mesopotamia from the 18th to 6th centuries BC. The Hanging Gardens of Babylon was one of the Seven Wonders of the Ancient World. Now, it is a bustling city in Iraq but since the whole city is censored by Google Maps it looks more like endless farmland.

Google Maps has blurred two properties on Princeport Road in the Tilery area of Stockton since 2009. The reason for this pixelation is unknown even to Jane Allison, the owner who told a local newspaper “I’ve been in this house since 2000 but I have no idea why you can’t see it.”

Area 51, also known as Dreamland and Paradise Ranch is the United States Air Force facility and a highly classified remote detachment of Edwards Air Force Base, within the Nevada Test and Training Range. Probably that is the reason why Google Maps is hiding it from the public. Some conspiracy theorists believe that this top-secret military base is home to aliens, however, according to Popular Mechanics “what is in there is just as interesting.”

All of North Korea

Yes, aerial and satellite view of North Korea is not available on Google Maps. Those interested to see the country on Google Maps can only view lush green mountains along with names of its cities. 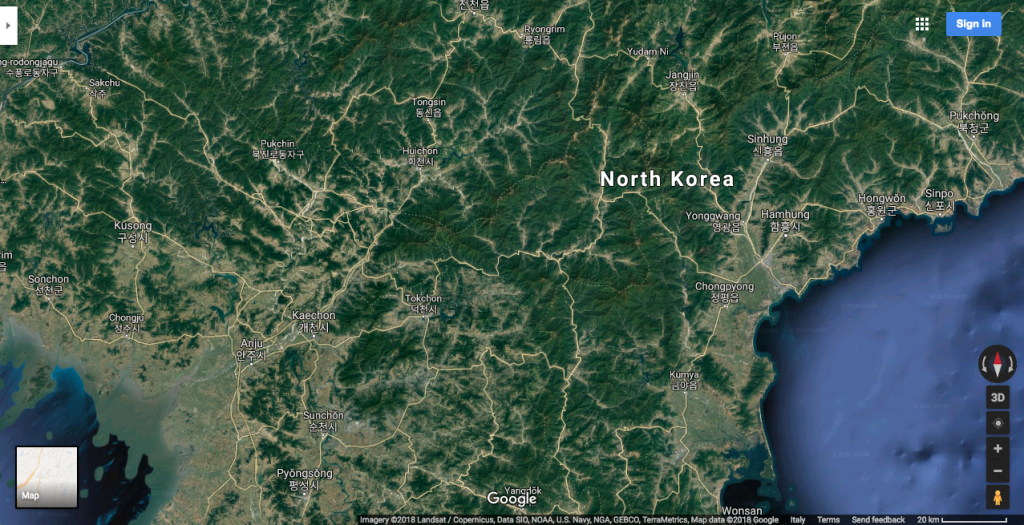 Moruroa was once known as Aopuni, is an atoll which forms part of the Tuamotu Archipelago in French Polynesia in the southern Pacific Ocean. Moruroa is also known for large-scale nuclear weapon tests conducted by France between 1966 and 1996 – Currently, some parts of the island are available for view on Google Maps while others are blurred and impossible for users to zoom in and see what is on the ground.

The Faroe Islands are located in the North Atlantic Ocean and controlled by Denmark. Another thing that makes these islands popular is their music-related culture however, Google Maps has blurred sections of the archipelago and no one knows why.

The building you see in the following picture with a red rooftop is the facility used by Republic of China Air Force in the Daan District of Taiwan’s Taipei. However, while it looks completely normal, Google Maps won’t let you zoom in and any attempt to zoom in will take you to the surrounding neighborhood.

Have a look at it here on Google Maps and try zooming in yourself.

There are plenty of other spots that are currently hidden by Google Maps which we plan to cover soon. Meanwhile, enjoy these 80 funny, creepy, strange and disturbing Google Street View images you will not find anywhere else. In case you are aware of hidden places on Google Maps share their location with us. A learning management system (LMS) is a software application for the administration, documentation, tracking, reporting, and delivery of…
byOwais Sultan This year, visitors to the gallery will be able to mint and claim a featured generative art NFT in real time.
byOwais Sultan