Empire market has been offline for more than 4 days.

Empire market Empire has been offline for more than 4 days.

Dark Web sites frequently experience downtime. This is due to various reasons such as law enforcement agencies cracking in on them or attackers trying to bring down sites with large scale DDoS attacks.

One such site that we recently reported on was Empire Market, the largest dark web marketplace which went offline on August 23. Reports alleged that Empire had been the subject of a Distributed Denial of Service (DDoS) attack which resulted in it going offline.

However, this resulted in the money of a lot of vendors and customers on the marketplace being left in Escrow – a system employed by marketplaces to act as a mediator between buyers and sellers ensuring that no one party runs away with the money owed to another.

How this works is that whenever someone places an order, the money paid is stored in a virtual vault which we can call the Escrow and is only released to the seller when the buyer confirms the order’s delivery.


This very fact has now raised an interesting question, what if the marketplace going offline due to a DDoS attack was a cover for what in actuality is an exit scam? This is now increasingly being believed seeing that the marketplace just went in the dark without any explanation by its staff.

Empire, the largest darknet cryptomarket is gone. With no explanation from its admins and no announcement from law enforcement, this looks like a devastating exit scam.

The darknet was in a golden age of trust. Expect a rough year of exit scams ahead as trust is rediscovered.

Dark.Fail has also reported that an anonymous staff member estimated the owners to profit off $30 million/2,638 Bitcoins with the marketplace’s 1.3 million users. Users were also found discussing their lost amount on Reddit through a poll and the comments section: 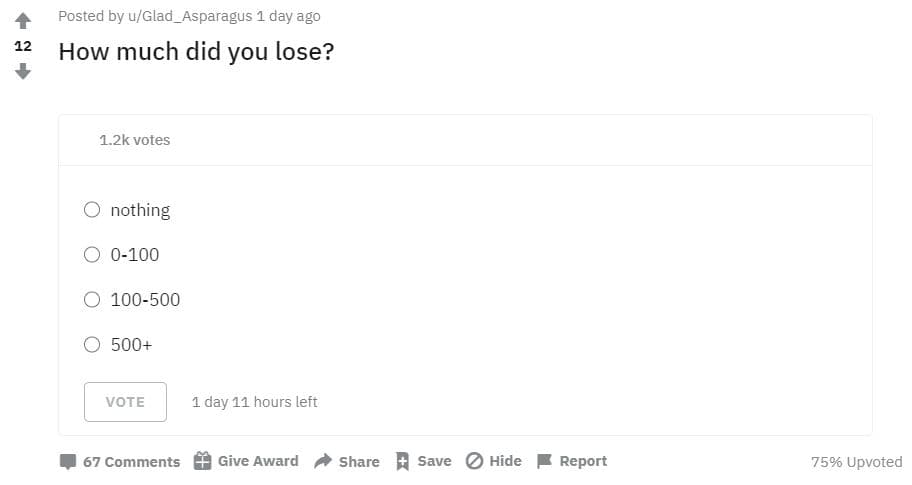 However, on the other hand, a staff member known as Se7en has put forward the view that the marketplace was closed down due to the admins tired of the efforts it took to ensure its uptime as shown below: 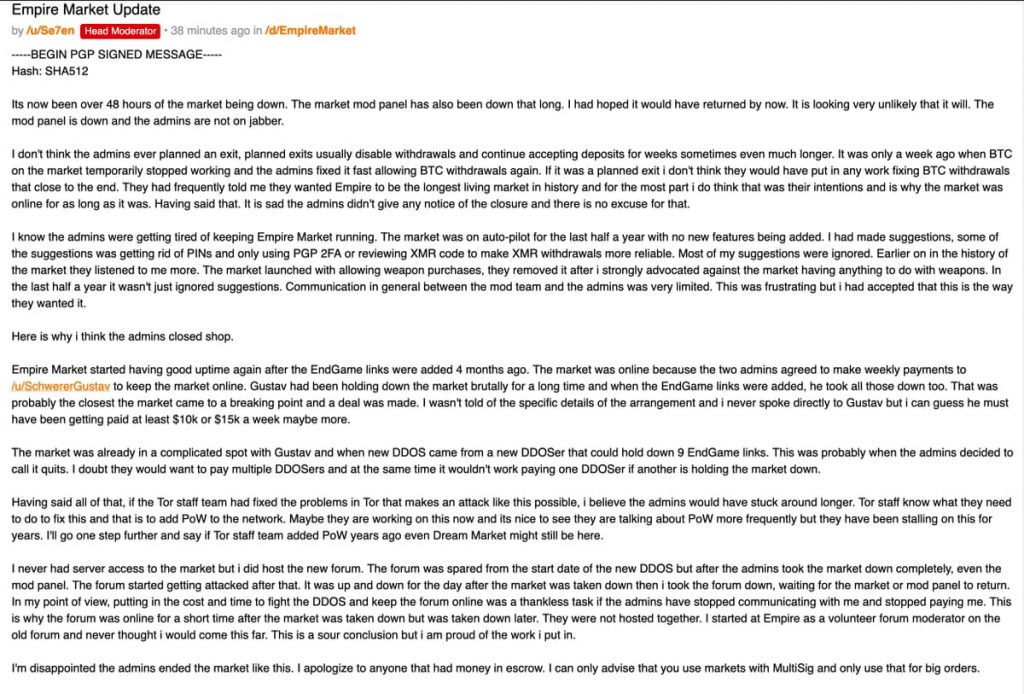 Furthermore, Se7en reconciled with the notion that if they were to indeed do an exit scam, Bitcoin withdrawals would have been disabled with the continued acceptance of new deposits in order to amass the maximum amount that they could. On the contrary, though, Se7en stated that:

It was only a week ago when BTC on the market temporarily stopped working and the admins fixed it fast allowing BTC withdrawals again.

Nonetheless, many have rejected this story and believe the exit scam version. To conclude, it is important to remember that since 2019, eight other large marketplaces have already done exit scam and so the trend basically continues.

Moreover, according to sources, this specific marketplace was found in the memory of (now seized) AlphaBay marketplace admin who allegedly committed suicide and so with that noble purpose supposedly there, many thought that the Empire market is different, something else that would distinguish it from the crowd. Now, no one is as sure with the mystery of its true fate continuing.

For the future, it is important that an alternative to Escrow be found, perhaps a more secure one that restricts the possibilities of exit scams altogether otherwise it will become increasingly difficult for people to trust dark web marketplaces.