Samsung tweeted and then deleted that tweet stating that users should scan their Smart TVs for malware “every few weeks.”

Smart devices are vulnerable to all sorts of digital threats, and this is not a hidden reality as we often hear about internet connected devices getting hacked or infected with viruses/malware. Since Smart TVs are also connected to the internet and use the Wi-Fi network for performing a variety of functions, therefore, these devices are also vulnerable to the threat.

Hinting on the same, Samsung Tweeted recently and urged the owners of Samsung Smart TVs to regularly scan for malware using the already built-in virus scanning software. The tweet was posted by the company’s support account in the US and a video attachment was also part of the tweet that demonstrated how to use the software.

However, the company rather hastily deleted that tweet, but we saved it to share with our readers. Here’s the now deleted message from the company:

“Scanning your computer for malware viruses is important to keep it running smoothly. This also is true for your QLED TV if it’s connected to Wi-Fi! Prevent malicious software attacks on your TV by scanning for viruses on your TV every few weeks.”

Here is a full preview of the deleted tweet: 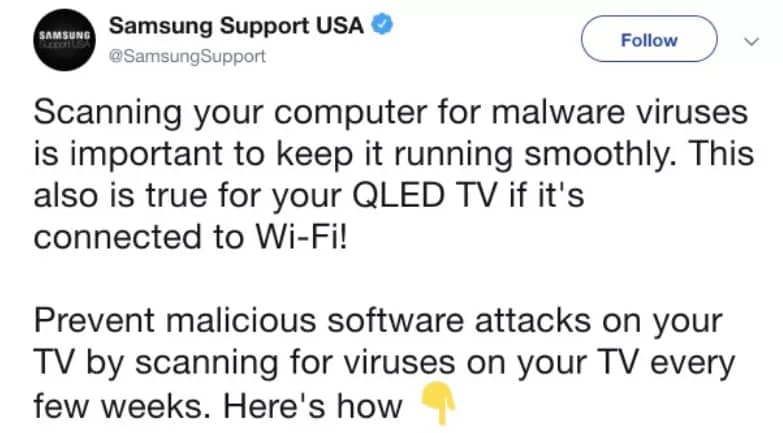 This tweet has suddenly brought the probability of Smart TVs getting infected with malware to the limelight. People are asking all sorts of questions, the most common one being why has the company chosen to post the tweet now and why hasn’t Samsung automated the process of scanning in its Smart TVs.

Some are even wondering whether there a new threat out there targeting Samsung Smart TVs that users don’t know about yet and the company wants the devices to stay secure or was it just a message to make the users aware of the risks.  There is simply no clarification issued by Samsung as yet.

Even if you think that your smart TV isn’t susceptible to malware attack, it is your responsibility to make it safe enough to be used within the home environment. That’s because if the TV is connected to your Wi-Fi network, any of its parts can become the target of a threat actor or hacker and the consequences could be far drastic than losing the access to Netflix, Amazon Prime Video and similar other smart TV apps.

Your TV could even be hacked to become a hearing device and anyone can eavesdrop on the conversations you are having in your own home as these devices contain microphones that pose a grave privacy risk if hacked.

Moreover, usually people use their credit cards to buy on-demand video content via their Smart TVs and the card information is stored in the device’s OS. Another way of exploiting a smart TV is by hacking it to post ads on the display screen directly. Therefore, it is indeed a piece of good advice from Samsung to scan your Smart TV.

How to scan your Samsung Smart TV for malware?

It is a very easy process:

> Click the Settings menu on your Samsung smart TV
> Select General
> System Manager
> Smart Security.
> Click on Scan and the scanning process for viruses and malware will start. Brand Protection is Essential for Cybersecurity

Is brand protection so important? Yes. Very much!  According to a 2020 study, 70% of customers believe that…
byOwais Sultan