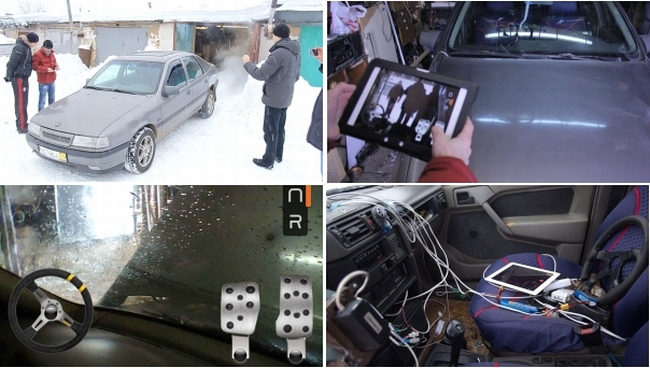 A group of Russian motorists from Tula Oblast have modified an old Opel Vectra into a remotely controlled automobile that can be driven through iPad.

The modifiers call it James Bond Car, which recently passed its first test few days ago in snow filled area of Russian city of Tula Oblast.

The video of test drive after modification can be watched below, showing how and what were the changes and addition that made the car one of its kind.

The brains behind the idea writes on their blog that

That’s the first big report about our trials…Long time ago (last summer) we consumed an idea of doing races via internet .. with real cars! We already tried it with small models, but now we wanted the 1:1 size. To start, they fixed all the mechanical issues that the car had and then got to switching out the electrics. It wasn’t an easy task.

Not everything went smoothly during the first trial – all systems except the acceleration control collapsed. Therefore, Uncle Vasya had to sit behind the wheel, after which I had “successfully” bumped the car into a snow pile. We had some hard time coordinating our efforts, when I was accelerating and Uncle Vasya was steering and braking. But it was fun! The blog explains that the video was made purely for educational reasons and hope anyone can modify their car to run on iPad.

That led to a number of changes to the car. They added a new actuator for the brakes, new motors for the steering, and the ability to shift gears instead of having to get in and out to do it.

The car is run by an app on an iPad 3. It doesn’t seem like it could be all that precise, since the controls look to be a steering wheel (which would provide analog control), brake and gas pedals, and buttons to shift gears. It doesn’t appear that the pedals can do anything other than be full on or off, so I’m sure that makes for an interesting driving experience.

Choosing a web hosting service that's right for your business