After Google’s CEO Sundar Pichai and Facebook’s Mark Zuckerberg the ”Our Mine” hackers have found a new target and this time it’s Twitter’s CEO, Jack Dorsey.

After Google’s CEO Sundar Pichai and Facebook’s Mark Zuckerberg the ”Our Mine” hackers have found a new target and this time it’s Twitter’s CEO, Jack Dorsey.

On 9th July the Twitter account of Twitter’s CEO Jack Dorsey was taken over by ‘Our Mine” hacking group. The same group who has been hacking social media accounts of high-profile tech celebrities by using old passwords from LinkedIn and MySpace data dumps.

Upon compromising Dorsey’s account hackers posted a video clip along with the link to their official website but Twitter was quick to delete the Tweet, however, those keeping an eye on hackers took a screenshot which is available below: 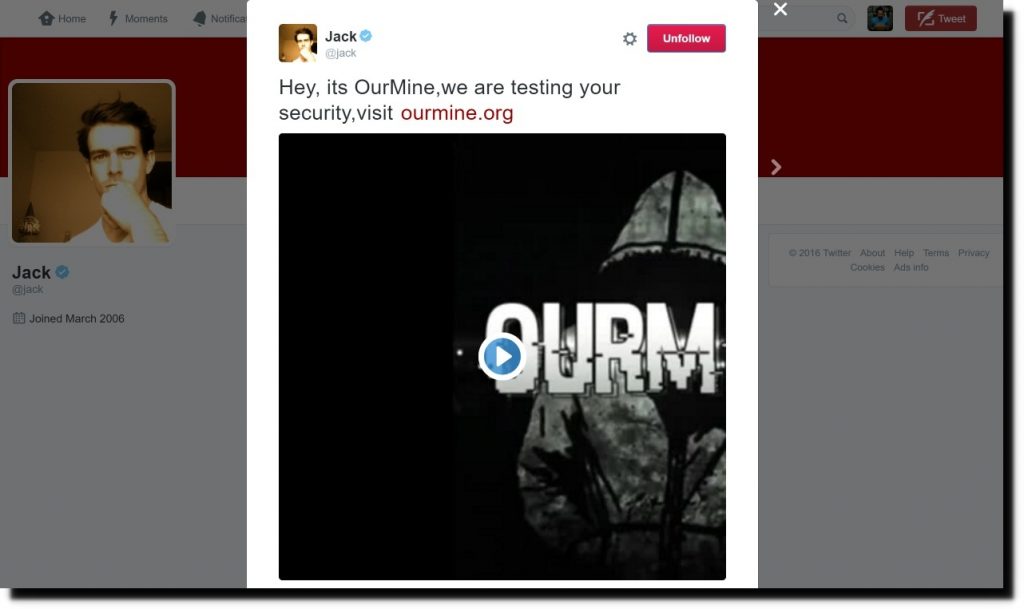 OurMine hackers are also working on establishing an IT security firm in order to assist those affected by their hacks to save them from cybercriminals looking to target users and harm them in the long run.

It’s true that 100% security is a myth but once you are on the social media try using unique and different passwords for all accounts as using same passwords lead to hack of all accounts one by one just like famous gaming YouTuber Redmercy who had his YouTube, Twitter and PayPal accounts hacked by Poodle Corp just because he was using the same password on all of his accounts.

As far as Dorsey, he has learned his lesson (we hope). At the time of publishing this article, his account was restored.