The subdomain of Baton Rouge City government website has been hacked twice in one day by none other than Ghost Squad Hackers who previously made news for DDoSing Ku Klux Klan (KKK) and Black Lives Matter websites. This time, the reason for targeting Baton Rouge City website was to protest against police brutality in which a city native Alton Sterling was shot and killed by Baton Rouge police officers last week.

Hackers left a deface page along with a picture of Alton Sterling and message against police shooting stating that: “Being black is not a crime! This is for the shooting of Alton Sterling, just because he’s black does not mean he is a bad guy. You will pay. We are the Justice. We are Ghost Squad Hackers ./R.I.P. Alton Sterling.”

Here is a full preview of the deface page uploaded by the GSH: 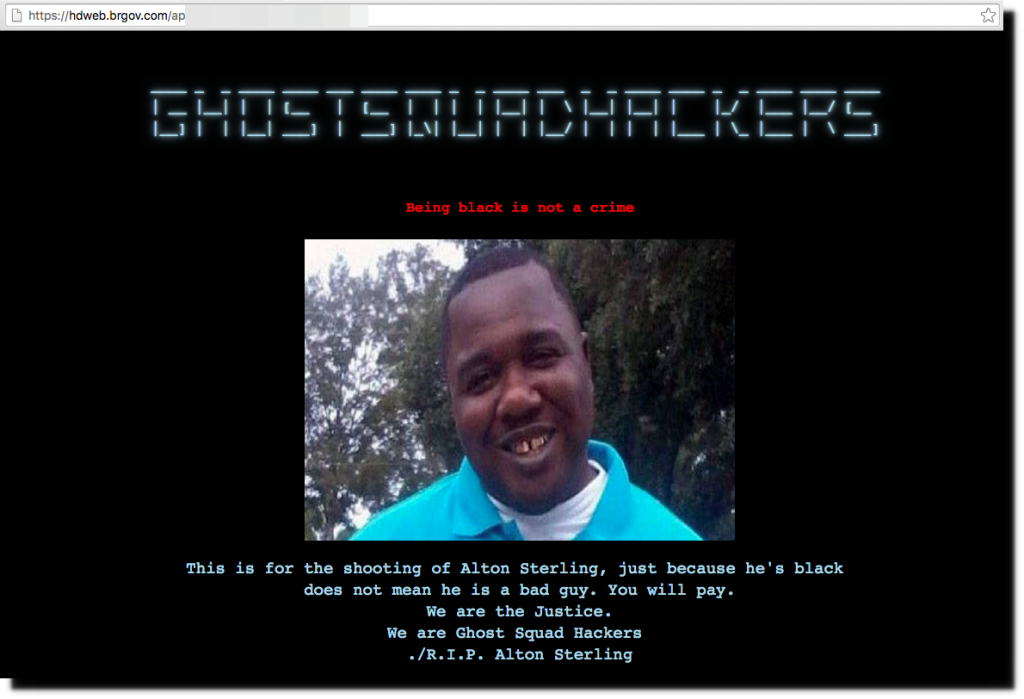 “We defaced the Police’s Website and DDoSed all other domains due to the ongoing police brutality we continue to see in the United States. This man DID NOT deserve to die,” said GSH in an exclusive email conversation.

The hackers further stated that they simply used blind SQL injection to bypass the security and deface the “Court session domain” of Baton Rouge City. GSH also claimed full support to Sterling’s family and also warned the police officers to remove their social media accounts before hackers come for them.

“We are the justice his son and family wants we are the Ghosts that fight in the dark to serve the light. We want to think the members of their family for staying strong! And we will no longer tolerate police brutality the ones responsible for this murder we are watching you! You better delete your facebooks and emails. We are after you!”

Baton Rouge City website was earlier defaced by a hacker calling himself “The Witch3r” from CyberTeamRox however in an email conversation he announced his affiliation with the Ghost Squad Hackers.

Link to targeted website along with its mirrors can be seen here.