Squid Game and Joker malware turn out to be a “killer combination” after all. Here are the details of which app was spreading the malware.

Squid Game and Joker malware turn out to be a “killer combination” after all.

Netflix’s biggest ever series Squid Game is a smash hit with over 142 million users watching it globally. This dystopian series from Korea has raked in approx. $900 million against a relatively underwhelming production cost of $21.4 million.

The craze surrounding Squid Game is surreal, and this is why cybercriminals are trying their level best to exploit its popularity. There are countless Squid Game merchandise, memes, and games available. However, at the same time, there are several unofficial apps uploaded on Google Play Store that are distributing malware.

A Twitter user and security researcher (@ReBensk) discovered an Android app that was actually Joker malware disguised as a Squid Game wallpaper app.

It is worth noting that Joker malware isn’t new, as it has appeared on the Google Play Store plenty of times. Joker malware can secretly sign in unsuspecting users onto premium subscription services by displaying a fake sign-up process. 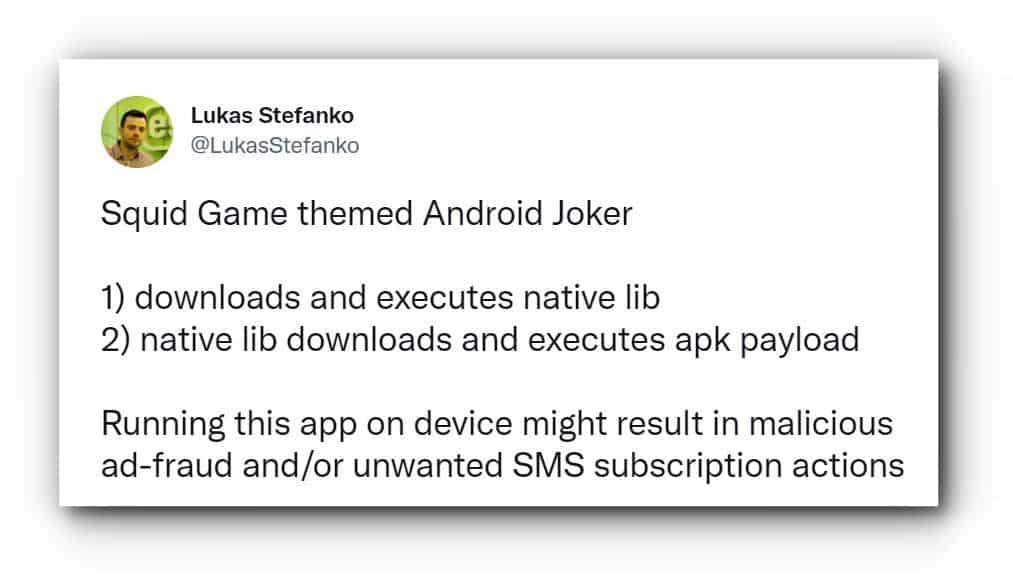 Although Google removed this particular app from the Play Store, what’s concerning is the fact that more than 5,000 users had already downloaded it. Moreover, according to Stefanko, there are over 200 Squid Game-related apps available on Google Play Store.

Stefanko evaluated all the apps and concluded that none contained malware, but they all had several ads. And, another startling discovery he made was that there’s no official Squid Game app at all. Hence, fans need to be very careful when looking for show-related apps.

Seems like a great opportunity to make money on in-app ads from one of the most popular TV show without an official game. The most downloaded of them reached 1M installs in 10 days. Its game play is not that well handled, Stefanko tweeted.

If you are on Android there are certain precautions you need to take before downloading an app, for instance, use reliable anti-virus software, scan your device regularly and avoid downloading unnecessary apps from Play Store and third-party platforms.

Researchers have identified a new scheme of ransomware called Ransoc. It is a new type of desktop locking…
byUzair Amir

The U.S and Canadian banks are threatened by a double jeopardy, double the trouble as the twice powerful…
byWaqas

The infamous Ask Toolbar is back in the news again. In the past, it received backlash from security…
byWaqas