The REvil ransomware group which is also known as Sodinokibi claims to have access to data that would damage Trump’s presidential campaign.

Last week it was reported that hackers from the REvil ransomware group stole a trove of top celebrity data from a New York City law firm named Grubman Shire Meiselas & Sacks. The hackers also threatened to leak personal data on celebrities like Lady Gaga, Nicki Minaj, and Madonna, etc. if their demands are not met which includes ransom of $21 million.

Now, the same hackers are claiming to have access to “dirty laundry” (referring to sensitive and potentially damaging data) on President Donald Trump. But this time, the REvil ransomware group is demanding a ransom of whopping $42 million, Hackread.com has learned.

Apparently, the demands from hackers came after the law firm refrained from paying $21 million ransom and rubbished the group’s claim of having access to its top-notch celebrity clients. It is worth noting that the REvil ransomware group initially claimed to steal 756GB of data from the law firm’s servers. At that time, the REvil ransomware operators claimed to have access following data on celebrities:

One of the screenshots hackers released as a proof of hack last week showing the list of celebrities whose data is in the group’s hands.

A look at the official website of the REvil ransomware group that can only be accessed on the dark web through Tor browsers, the hackers plan to publish the data from next week giving the law firm 7 days to pay the ransom. According to the warning message addressed to the targeted law firm and President Trump, the hackers wrote on their website that,

“Mr. Trump, if you want to stay president, poke a sharp stick at the guys, otherwise you may forget this ambition forever. “And to you voters, we can let you know that after such a publication, you certainly don’t want to see him as president… The deadline is one week.”

The REvil ransomware group is also threatening to “destroy” the law firm in case the ransom is not paid. Additionally, the group referred to the Travelex incident in which the company was reportedly forced to pay $2.3 million ransom after its servers were crippled by the same group. 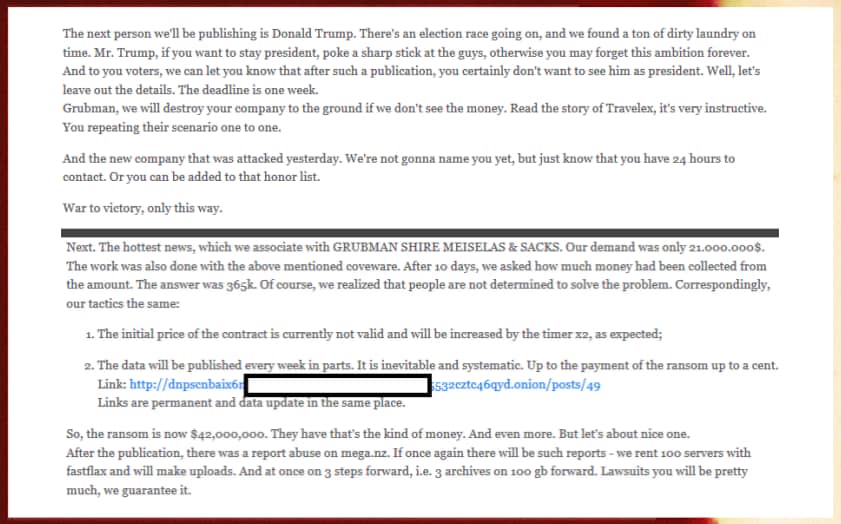 However, according to The New York Post’s report, the law firm has already refused to negotiate or pay any ransom. A source close to Grubman Shire Meiselas & Sacks’ Allen J. Grubman who happened to be a prominent entertainment attorney in the US, the post was told that,

“His (Grubman’s ) view is, if he paid, the hackers might release the documents anyway. Plus the FBI has stated this hack is considered an act of international terrorism, and we don’t negotiate with terrorists.”

As for the REvil ransomware group, it will be important to see how the group plays its card. Hackread.com is keeping an eye on the situation and this article will be updated with additional information based on what the group or the law firm does.

This comes after REvil's demand of $21,000,000 was not taken seriously by GRUBMAN SHIRE MEISELAS & SACKS.

We're talking big money here, REvil already received large amounts of money, they're probably getting experienced in assessing the worth of the data they hold. pic.twitter.com/Th2MTPkuat